The Avengers: The Secret Six and a Giveaway 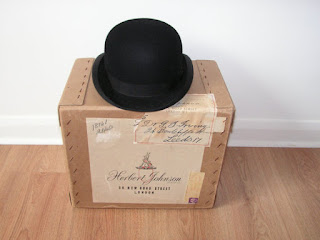 This is of course an adventure from The Avengers' comic book adventures. I bought the second set of adventures published by Big Finish, only to find that there is a printing error on one of the discs of this set in the first edition. The upshot is that through Big Finish being keen to bend over backwards to please their customers I have wound up with two copies of the disc of The Secret Six (both of which are printed with the name of another adventure. Rather than throw away the surplus one, if anyone wants it, just drop me your address in a comment on this post (I won't publish it), and I will put it in the post to the first commenter.
There is a sense in which this is both a return to the early days of The Avengers (literally two against the underworld), and yet also manages to reference virtually every mystery in history, as well as referencing various Avengers adventures, which themselves already reference or parody many adventures! It may sound overly postmodern but this Avengers adventure is a lot of fun! The advantage of this particular disc is that it has an extended feature at the end with interviews with many of the actors and production, which makes an interest commentary on the advientures.
I like the sheer exuberance of this story, and the fact that the plot is frankly completely bonkers. John Dorney (who adapted this story from the comic strips) makes the point that the comic genre allows the story to go far more places than television (at least at the time) ever could have done, and so this story in particular is more far-ranging than the Avengers TV series, with all sorts of effects which are more easily realised audibly thn visually. For a start there are (obviously) six baddies in this one, who are in no way actually secret. Echoes of Intercrime, obviously.
Yet despite these early-Avengers overtones we are firmly in Avengers-land. The host for the party which goes wrong is of course a Lord. Do I need even to comment on the fact that all the criminals are foreign? - Except one, who is actually also a knight, despite speaking cockney.
What I'm about to say isn't a reservation because I love this play. But I do think that if you are inclined that way you may find that it uses too many devices of the genre (electrified chair and descending top of the four poster bed) and you may find it rather 'ham'. As I say this is not a criticism, it is just a comment that this may not appeal to all tastes. Personally I love Murder by Death and can watch it repeatedly without ever getting tired of it, but I think if you look on that film as a bit corny you will see this adventure in the same way.
On the other hand, the possibly-corniness-to-some-eyes is what makes this in the true Avengers tradition. As we know the whole point of The Avengers is that it is not real, and that applies to this play from beginning to end. Steed was never real to start off with. The secret six are completely unreal. The plot is unreal. Lord Tweezle isn't real - none of the landed gentry in The Avengers ever is. And that is the point.
It is a sign of the quality of this series that I really only want to repeat what I said about this series the last time I posted about it. If you love The Avengers and can live without Patrick Macnee and Diana Rigg as Steed and Mrs Peel, you will love these. The commentaries touch on a wish by Olivia Poulet (Mrs Peel) that more will be made, and frankly, I too hope they will!