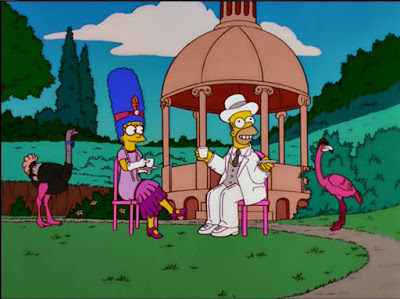 I have come incredibly late to the cult of The Simpsons - for some strange reason I took an instant dislike to them in the nineties, but now they make me roar with laughter. I make no apologies for blogging about an episode here, since I think The Simpsons are now venerable enough to be considered Cult, and they're also not the newest show I've written about here. This episode in particular fits in to this blog because it is the famous one which parodies The Prisoner and has a guest appearance by Patrick McGoohan, so is definitely suitable a cult TV blog.
The first thing to say about this show is that I think you should ignore many of the reviews for the season twelve boxed set, which say that the packaging is impossible, and you inevitably damage the discs removing them. To get that out of the way, the way to get one disc out is to squeeze the flaps containing the discs you don't want and turn it upside down until the disc you want starts to slide out and grab it. There, simple, and controversy out of the way.
There is an irony about this Simpsons - a deliberate one, no doubt - that it comments on our modern world of internet surveillance and invasion of privacy. In fact, if this isn't exactly the sort of world the original Prisoner series warned us about, I don't know what is. The themes of anonymity and the use of knowledge run through this Simpsons at every step. This is seen through the microscope, and the tiny world being viewed is what could happen in any town if a single person started using the 'information' he had, and of course the trouble is that *everyone* has secrets and they don't want them revealed! Like all good television, The Simpsons hold up a mirror to our world, and the uncomfortable truth is that so many people will believe any old rubbish, and the point of the prisoners' knowledge is that it is really a load of old rubbish which is clearly very threatening to the powers that be. It is so clever that the particular bit of nonsense which Homer has stumbled upon is the hysteria around flu jabs, thereby drawing on a true ridiculous theory.
I love the sequence where Homer wakes up in The Island, which deliberately apes the awakening in The Village scene of The Prisoner. The Simpsons version of The Prisoner effectively hold up a mirror to the real series as well by pointing out that Rover is actually only a balloon when it comes to it, while maintaining the fear that the agents of control of The Island are actually in our own homes. My only criticism of the episode is that it reverses the priorities of The Prisoner by spending the majority of the episode showing what Homer has done to deserve incarceration, rather than spending the majority of the episode on The Island only slowly showing what he has done.
Nonetheless this is a Simpsons episode of special interest to cult TV fans.
60s TV The Prisoner The Simpsons