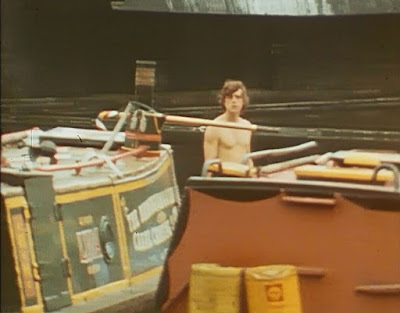 Regular readers will remember how I walked out of my last job in September and walked straight into a better one. I am delighted to announce that only three months later an even better opportunity for promotion has come along and my notice is in. As my congratulatory present to myself I bought several of the things in my Amazon basket, Spike Milligan's Q, which I don't doubt I will be writing about here soonish, and Flower of Gloster, about which I just have to rush into print at once.
On reflection I find that I have written about several children's programmes here, or rather programmes intended for children, which may or may not have a grown up following as well, but relatively few of these stay in my permanent collection. Tintin is there in French - he used to irritate me in English, and then I actually went to France and saw kids sitting on the floor in the hypermarkets reading the books, and got hooked. I also keep the 1970s version of the Famous Five, just because. I have a feeling that Flower of Gloster will be a keeper.
You see, Flower of Gloster is a dream. It is so sweet. It is the sort of show you can put on after a nightmare day at work, and be taken elsewhere. Notwithstanding that moving a canal boat down the length of the country is very hard work indeed, so you do see some real labour going on.
A major constituent of the different world depicted in Flower of Gloster is the sheer difference that the intervening fifty-odd years have wrought on the world we live in. For a start, there is a complete absence of the sort of safety-mindednes subsenquently enshrined in law by the Health and Safety at Work Act of 1974. On several occasions, you see the actors in the 'cut', actually in the canal water and while canal swimming may have been a commonplace in the nineteenth century, I don't really think it was ever a good idea. Children are seen running around completely without parental supervision, and one of the wonders of this show is that is shows a world for children which is free of the then-prevalent fear of stranger danger. Ironically this show depicts almost exactly the world I write about her so often - the 1960s world where the old order was passing, and a brave new world being built. I suspect that at the time people thought the canals were dead, although I have no idea whether they are actually used commercially any more in the age of high-speed communication. Another aspect of the difference in communication is the regional accents you hear - I genuinely think that probably you couldn't hear such strong British regional accents nowadays, and in places, even as a native speaker I have difficulty understanding what the characters are saying!
Then at the start of disc 2, the show suddenly comes home, which is announced by the words, 'We've got to get to Wolverhampton by tonight'. Living in the Venice of the UK as I do (no, seriously...) there is no way my home city of Brum could not appear in this show. If nothing else it shows how bad the state of the canals was in the 1960s before the restoration movement took off, and Flower shows the post-industrial landscape of the Midlands before the warehouses were turned into flats and what have you. I love the 1960s view of the city centre - and I particularly love that the instant they tie up in Gas Street basin they get out and get shopping! But what I love most is the contrast between the 'old' canal and the thrusting new world being built about it - which exemplifies that contrast that features in so much of the TV I like. I love that they go shopping in the Bull Ring and you get to hear the market traders shouting - which really hasn't changed in the years since, although they don't tend to wear ties nowadays! I love the way the man selling rolls of cloth works out the maths in his head *in old money* - I mean actual shillings - which is something which always defeated me although my mother still thinks in old money. I love that then as now and always, Birmingham is one big building site with cranes everywhere - in fact this is a Birmingham thing and there is a 19th century folk song about a sailor who came back home and didn't recognise it as Brummagen!
Production values of this show are interesting: I believe it to be a filming of a book, although I'm not sure whether it is a true story, but I know for a fact the show is made in a way which is far divorced from story-telling. Much of the lore of the canals is explained at great length, so there is a kind of educational undercurrent, but it is presented very much as the tale of a real journey. In fact it looks and feels much more like a documentary than a scripted show, and the extras who tow the boat in Wolverhampton are very obviously locals judging by the accent! Purists probably wouldn't be that keen on aspects of the restoration - the sound is clean and crisp, but the picture shows more dots and marks than some people would probably like. The theme is orchestral but I love the way the incidental music is jazz numbers, which is one of the things that prevents this show from becoming unadulterated pastoral idyll.
I have no hesitation in not only telling the rest of the cult TV blogosphere to go out and buy this series right now, but I am also giving it my rare Stonking Good Television award, for its escapism and unusual production.
Topless on TV