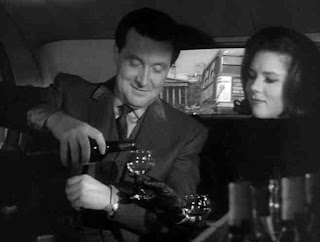 Subjects I have mentioned here frequently include a fear that no 'new' old TV will ever come to light again, and the atmosphere of old TV. I have never really posted about what it is about vintage TV that I and others appreciate.
A reasonable assumption would be that it is an exercise in nostalgia, but I think this assumption is flawed, although of course it will be true for some people. Personally I often find that programmes I remember fondly fall flat on their face being watched at this length of time. Obviously I don't mean the ones I write about here! In fact while you do get reviews on Amazon where nostalgia is clearly the point, it is noticeably lacking in the TV blog community, the sort of people who will read this.
It must be that there is something different about old TV from the contemporary version. I don't think it is primarily quality, as I say, I think it is found in the medium rather than the writing. Of course I can't ignore that modern TV is written much differently.
Of course modern TV depicts a different world from, say, that of 1960, but I still don't think that is the thing about old TV. I personally don't tend to take to period dramas of whatever age, and that is what makes me think that the era depicted on the screen is not what makes the difference: I don't think I would like a modern series set in the sixties. In fact I didn't like Mad Men, not least because its depiction of smoking was far too self conscious.
I am reduced to production then, and I think this might be the reason we like old TV. It is perhaps like those people who prefer records to digital audio because the sound's better. When you don't ordinarily watch CGI it is very obvious and apparent. Of course everyone knows it's there, but there is something more real about TV which required the events shown actually to take place and to be filmed. There is a reality about the events depicted which you don't get from computers.
Perhaps this is what it is? Perhaps we who watch old TV want to see things really happening to people who really existed?