The Avengers Series 1: The Yellow Needle 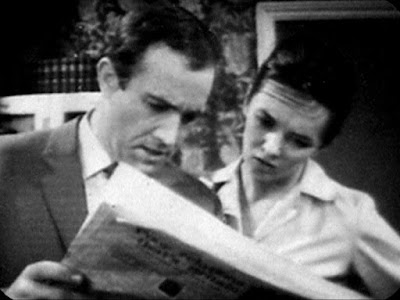 Back to series 1 of The Avengers today. I think I'm going to have to accept that even though I may plan series of posts in an orderly line on an orderly theme, I don't think like that and thus my blog is always going to be more of a mishmash of posts on different themes which come and go as they enter and leave my head.
Anyway this Avengers is a classic series 1 Avengers, in that it completely lacks the weirdness of the later series. There is sex, or rather sexual tension in it, but it also lacks the sheer sexiness found in the later Avengers. I don't really have an overview of the series in my head, but I suspect that Steed plays a larger role in this one than he may have done in a lot of series 1 episodes.
The differences from the later Avengers aside, this is one that is very much of its time and perhaps is now seen at a disadvantage, since we can only see it with the benefit of hindsight. The specific time in which it is set is that when Britain's former colonies in Africa were seeking independence and making their first steps as new states. The fact that this transition was frequently accompanied by a bloodbath is a fact which can be explained in any number of ways and tends to draw out the prejudices of the commentator. To declare my own bias: it is what you can expect when we (the British) create a country to our own design, pillaging it of natural resources, ignoring existing tribal tensions and boundaries, treating the indigenous population as backward idiots who should be grateful to us…and then leave them to it, with no possibility of a return to their previous forms of government and high expectations of future prosperity and so on.
The assumptions of the Avengers episode are completely different and surprisingly characteristic of The Avengers when they are examined. For a start, the depiction of Tenebra, the African state which is on the verge of independence, is breath-takingly politically incorrect by today's standards. Even the name indicates that this is a country in the darkness which is incapable of taking its own steps to independence without descending into anarchy.
The answer to this is of course the intervention of the British government in the form of John Steed, and this is what I mean about the Avengers-ness of this story. It is very much one where our hero races to the rescue of whatever institution is at risk from some diabolical mastermind, and the peace and security of Blighty and our way of life is assured. In this case the life of the president of Tenebras is assured so that the country can't be taken over by the opposition who are obviously dirty tricks merchants. Thus the president of Tenebras, who is obviously thoroughly Westernised, remains Our Sort of Chap.
If I seem to be a little waspish over this, it is interesting that the president is here placed in opposition to people who clearly have African (I think I would probably have to place the country in West Africa in one of the parts which are semi-Christian and semi-Islamic) names and interests, and one of them has an Islamic name. These people are depicted as not learning our gentle Western ways from the years of colonialism and will clearly stop at nothing to get their own way.
The colonialism/independence conflict apart, this is additionally a fairly straightforward political story of intrigue, and it falls down because it is very obvious that Jacquetta Brown is going to be on the side of the enemy. It's a classic of detective fiction – the person administering the life-saving injections has the access to administer life-finishing injections. Obvious really. The story further falls down because it is inconceivable that nobody would notice in the five years she has worked for Sir Wilberforce, that she has a K branded on her forehead. A whole five years of a fringe which has remained solidly in place and never betrayed her secret? Impossible.
What this Avengers does for we fans who will never now see it, it illustrate marvelously the thing I have noted so often about Steed before: he uses his associates and exposes them to danger. In this case Keel only gets drugged, but since the person who did it is obviously a killer, he could quite easily have ended up dead. There is an irony in this, because it seems like the exposure to danger theme comes from above in the form of the British government, since Steed goes off to Tenebras alone posing as a reporter and is in probably even more danger, with no hope of support at all. So while Britain will interfere in other countries' plans for independence, it yet will not look after its own subjects. This Avengers manages to leave a very nasty taste in the mouth if one is British.
Image credit: dissolute.com.au
60s TV The Avengers