Doctor Who: Planet of Giants 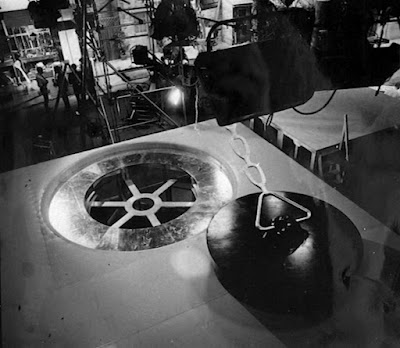 One of the all-time great Dr Who adventures, this one, or rather one of the legendary ones because it was intended to be the first ever, before being demoted to first adventure of the second series.
I'm trying to make a connection betweem the original educational intent of Dr Who and the major concern of the time which is the real subject of this adventure. This concern is of course the contemporary ambivalent attitude to technology, where it is both the white hot hope for the future, and also a source of danger if not managed properly. Rachel Carson's book about the supposed dangers of DDT was published the year before Dr Who started, and since her findings - that DDT has effects further down the food chain - while not being completely unchallenged at the time, would have been very much the latest science at the time. Ironically, since I believe Carson's research is now believed not to have been controlled enough, of course this Who's educational intent missed the point.
That is not a criticism, because anyone can be right with the benefit of hindsight. This Who has however been subjected to the sort of attention which any show of this age is particularly unable to withstand, and as a result has tended to get heavily criticised on the internet. Since this blog is my own ramblings on classic TV I will just say that my only real criticism is that the twin strands of dangerous chemical and shrunken TARDIS crew are too easily mixed up. Once again, though, I think the real reason for that is that TV shows of this age require watching with closer attention than many newer ones, so it may just be me.
I notice a tendency to connect the shrinking motif here to the 1950s film The Incredible Shrinking Man, but I think it can be traced much further back in various media - it can be found in Laurel and Hardy, and of course in Lewis Carroll. It is the science fiction thread here, in counterpoint to the real world concern about dangerous chemicals. I would also note that The Avengers picked up on both these themes later in the sixties, in different episodes: the shrinking motif is well suited to The Avengers' unreal world, while the poisonous dust motif is well suited to The Avengers' plotline of attempted world domination by some diabolical mastermind.
One thing I didn't realise as I watched the four episodes on the DVD was that in the extras I would find two additional episodes cut from the show as originally made. In fact they are recreations of those episodes, and I have decided that the way they are done is my favourite way to reconstruct a show. Footage is cleverly taken from elsewhere and the missing soundtrack voiced by actors playing the original actors playing the characters. These actors are superb, and you really do have to look closely in places to see that the action doesn't quite match the dialogue. This way of reconstruction to my mind beats the animation or still photography methods hands down.
The other extras on the DVD are also superb, and give an insight into the making of the series.
This Who adventure will always have to bear a heavy burden in terms of its status as the one which could have been the first but wasn't. Personally I don't think it would have been up to the task of kickinh off an entire new sci-fi series: while of course it does bring the world of the time lords into ours it doesn't manage the atmosphere of strangeness that An Unearthly Child has. That said, it is still a very atmospheric Who, using both a stock science fiction trope and a contemporary concern to weave a competent tale.
My favourite bit: the switchboard operator and her policeman husband using the switchboard to trick the baddies into giving themselves away.
60s TV Doctor Who