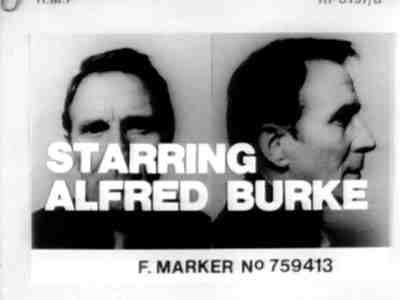 Back to the 1960s, 1969 to be precise, for this episode of Public Eye. I am reminded that it is actually the first episode of the fourth series, although you wouldn't immediately know that on the basis of what is currently available. Virtually the whole of the series up to this point has been wiped, leaving only a few episodes of the ABC series remaining from the run up to this point.

What this means for us now is that to all intents and purposes Frank Marker's career begins with him getting out of an open prison. Of course there are hints of his previous career as a private investigator and the mistake which caused him to be incarcerated. The mistake has obviously left him with a legacy of bitterness, which spills out periodically for the rest of the series.

This series is usually considered an odd one out in the run of Public Eye, because it concentrates far more on Marker himself than on his actual work. The fact that Marker is taken from his life in prison to the rather controlled life of a man out on probation is psychologically very revealing, or rather it is revealing to the viewer in that Marker reveals little of himself to most of the people he meets.

This begins with the prison governor, who actually comments to Marker that he thinks he is the convict he knows least about. Personally I get the impression that that isn't strictly true: I think the prison staff and other convicts actually do know about Marker, but find it difficult to believe what they are seeing. What they are seeing is a man who seems to have no family, no friends, no sexual interest… To the rest of the world this makes Marker a complete mystery! It is also revealing of the ways in which people measure other people: by their relationships with still other people. The fact that Marker can only be measured by his apparent lack of relationships makes him a mystery man.

On the surface this episode is about Marker's release from prison and rehabilitation in Brighton, but on a deeper level it is actually about how people relate to each other, make choices, gain redemption from past mistakes, and being alone and thus forced to face your own reality. It is telling that Marker's encounter with a woman goes horribly wrong and he ends up feeling angry towards her for screwing him over and having to assert himself. If you read this scene in the context of his probation officer pointedly asking him in the same episode whether he is 'queer' and it is obvious that Marker is not, then this scene points out that Marker's relationships with women, in fact other people, are far from conventional. This scene is the bedroom scene with a woman, involving alcohol, and actually only gets as far as sitting on the bed, which is really not very far at all. Because the woman takes advantage of him, Marker's distrust of other people and aloneness is reinforced, both for him and also for us in understanding his personality.

In fact Marker says this himself in his recounting a story about a widow to the probation officer. He says that the widow was seen by her doctor who gave her some medication to take, but also could only give the advice not to live alone. Marker half-jokes that the only way the old lady could not live alone would be to get into the coffin with her deceased husband, but the real point of his story is not about choice, it is about aloneness. The whole point of this episode is indicated by the question mark after the title – Welcome in Brighton? Means Not Welcome in Brighton, and I feel that Marker both expects not to be welcome and also prefers it that way really.

Marker is given work in a building firm, but there are hints here that he will find his way back into his own occupation, because he uses his detection skills to track down the wife of another convict by means of seeing where her butcher delivers to her. Incidentally that was an aspect of this episode that I find interesting in economic terms: the meat he orders for a wife of a man in prison would now be very expensive and probably not something she would be able to afford at the drop of a hat. I do love that it is delivered by bicycle immediately: something which is definitely not bettered nowadays.

There is however some human redemption in this story: Marker is obliged to meet a former solicitor who has also come out of prison, and it is apparent that actually the solicitor's position is worse than his own. Not only professionally, because the solicitor can never return to his work but it is also made excruciatingly plain by the solicitor commenting that Marker's room is better than his and various other comments in that vein. He is forced to encounter the result for a solicitor fallen  from grace, at first hand, rather than merely wallowing in his own anger and misery about the results for him.

There is also a progression in Marker's human condition throughout the episode. He begins it pointedly in prison uniform and therefore one of many in the same position in the prison. Nonetheless he manages to be the odd one out even there. He ends the episode in a much better position, as one who has made his own decisions and determined his own future. He has been screwed by the system and has the anger which goes with that, but he ends the episode relatively free from that and with his self-respect intact. The fact that he lives by himself is a complete mystery to the many men who see him in this episode, but by living by himself and for himself he attains a level of safety and self-determination which cannot be matched by other people in this episode.
60s TV Public Eye