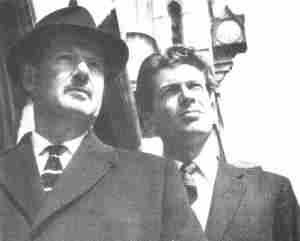 Legend. Tthat is the only word for this series. It is the stuff of which cult TV legend is made. A phenomenally popular series in the 1950s and 1960s, and for the most part wiped by its makers Associated Rediffusion. It is right up there with the one remaining episode of Police Surgeon, the first series of The Avengers, and I gather that there are enthusiasts out there who have made it their life's work to locate more episodes. I gather there are people on the internet selling the available episodes on DVD but there are also episodes available to be watched and/or downloaded in all the usual places in cyberspace, so there isn't really that much  need to pay for a DVD.
Personally I have downloaded the five available episodes on archive.org and watched them in an order which is probably out of synch with the order they were broadcast. I'm not sure that really matters, since it seems they are far divorced in original running order, and so there isn't any continuity in arc development to be had.
The experience has been a rather disorientating one because I am watching one of the all time great TV series with *no* idea of who is who, their character development, or what has happened in the series before I have wandered in. I am also particularly wary of generalisations about TV of the time based on the limited selection I have seen of the limited selection which remains, but I am very interested that crime was apparently of such interest to the public at the time. I am basing this purely on the fact that this show was so popular, and that another of the legendary TV series, Dixon of Dock Green, was of course also about crime.
I have a feeling that there may have been something in the air at the time which made this so. Again I may be leaping to conclusions, but I wonder whether the seismic shifts in society which took place in the 1960s may have been responsible for that, by setting up an apposition between the safe established world which went before and the demi-mondaine world of the young, with their free love and loud clothes. Parallel to this is of course the attitude to progress of the time, which made it fine to sweep away the past and power on into the future. I wonder how these two opposing movements of the time could ever be kept in a safe relationship and whether the disjoint between fear of revolution and the yearning for the brave future would cause a yearning for the relatively safe world of the police procedural?
Again I am risking generalisations based on very little evidence, but No Hiding Place is worlds away from the world of policing depicted in The Sweeney, only a decade later than its later episodes. No Hiding Place is, after all dealing with the same age as The Avengers, which very often deals with the theme of the solid establishment figure (or institution) who goes off the rails and goes to the bad. I think that if you put that theme  together with the solid world of the police procedural, and then add social unrest and the revelations of police corruption from the 1970s onwards, you end up with the world of The Sweeney.
With the benefit of this hindsight, it is apparent that No Hiding Place is dealing with a world which was about to vanish, and even with this knowledge, it is a more cosy and secure world than the one we have lived in since. One of the things I like best about old TV is the way it shows the lives and artifacts of the past, and this distance is very apparent in No Hiding Place. Evening dress, for example. I'm obviously mixing with the wrong sort of person, but I have never worn evening dress in my life. In fact when I look at the clothing in No Hiding Place it is apparent that it is real quality made to last, not the rubbish we have nowadays, which is literally designed to fall apart after being worn a few times.
Naturally the show's writing and production are completely of their time. The pacing of the stories is very interesting, in that it seems to alternate straightforward procedural with some scenes of 'human interest', and alternates the pace slightly. At no point is the pace the sort of snail's pace you find in some 1970s shows, it is always rather faster! This is a show which would require attention, though, and suggests that the viewer is intended to watch along and think about what is happening. The show is almost completely studio-based, of course. The shows I have downloaded are not terribly good quality, but they are fifty years old and in an unrestored state, and apart from anything else were free, so this is a comment and not a criticism.
I looked up this show because of a number of pre-sixties shows I have seen remaining episodes of lately, thinking that it was earlier than it was. No Hiding Place certainly represents an earlier age of television than most of the sixties shows I have written about here, and I would have to characterise it as a solid but not stodgy stalwart of the television of the time. If you like old TV and have not seen No Hiding Place, I would certainly suggest you look it up and have a watch.