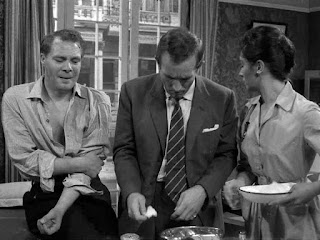 I'm wrong. I'm wrong wrong wrong wrong.
Never has it given me so much pleasure to say these words. After my confidently stating that no more Avengers Series 1 episodes would be found, behold Tunnel of Fear has turned up. You can read about it and other recovered shows at http://observationdeck.kinja.com/lost-episode-of-the-avengers-rediscovered-after-55-year-1787383187
I don't need to tell readers how delighted I am and it is one of the episodes I have always wanted to see. My only sorrow is that the first screening next month is sold out!
Image credit: http://ianhendry.com/the-avengers-1961-lost-episode-tunnel-of-fear-from-the-very-first-series-rediscovered-after-55-years/
60s TV