on September 22, 2016
As usual there is a reason for a hiatus in posts here. I am delighted to announce my resignation without notice from my shitty employers on Monday and that I already have an interview this coming week. They asked me in today to ask me to go back but they’re going to have to do much better than that, and I am pursuing their treatment of me into an employment tribunal. Anyway, my current personal issue provides the perfect setting for watching The Game (a BBC series first broadcast on BBC America in 2014 then over here on BBC2), because it is all about intrigue and lies. It also has the unusual distinction of being the newest TV show I have ever written about here, so it must be good. 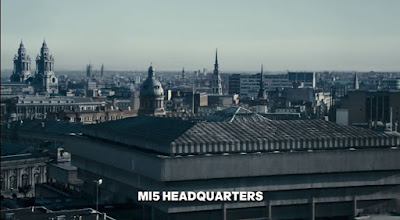 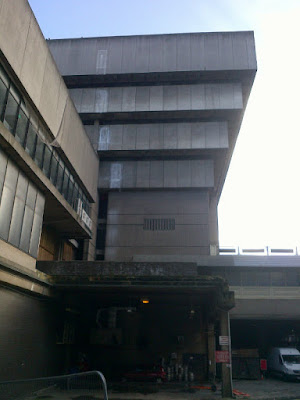 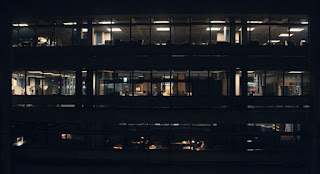 The Game is set in 1972 and it has achieved a remarkable success for me. Normally I hate period dramas of all sorts because of the feeling of unreality in comparison to the actual period TV I more usually watch. That said, 1972 is bang in the middle of my period, and The Game does a remarkable job of not getting on my nerves. There are some possible criticisms that it is slightly too squeaky clean for 1970s Britain, but I personally don’t find that too distracting. I more tend to get distracted by the ambivalent figure of the protagonist Joe, but I feel that that is probably intentional. Again, I think he is probably rather too squeaky clean in a modern way for the period, but again that is a matter of personal taste. I would say, however that there are times when his accent sounds Irish, which doesn’t sound right for an MI5 agent at the time, and what is completely wrong for an MI5 agent is that he is way too closely involved in the matter at hand.
There are Avengers echoes in the fact that the boss in MI5 is called Daddy. The show actually does a very good job of creating a sense of creating the authentic 1970s espionage milieu. I note that the scores on sites such as IMDB and Rotten Tomatoes are high, and reflect probably a better public opinion of this show than the rather dodgy reviews given by the professionals. It also places me in the rather unusual position of writing a more positive review than most of the ones on t’internet!
On a completely personal note there is one real star of this show which is not credited. Much of the location filming was around Birmingham city centre where I live, and the real star is the former Central Library which plays the part of the MI5 headquarters. To cut a very long story short, the library was part of one of the council’s ambitious but short-sighted redevelopment schemes, and has been an embarrassment to them ever since. Cheapening of materials, an unfortunate placement, a lack of maintenance, the fact that the land it was on is prime redevelopment ground, phenomenal energy bills, and the passing from fashion of the library’s architectural style, mean that the council has been hell-bent on its demolition since the 1980s. A prolonged battle between the council and the brutalist architectural lobby resulted in the government granting an Immunity from Listing, and I have just been up there now and watched the last bit of it being demolished. 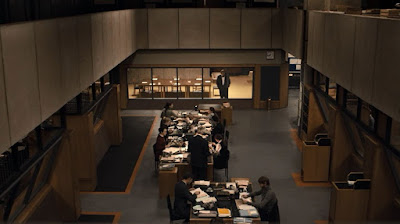 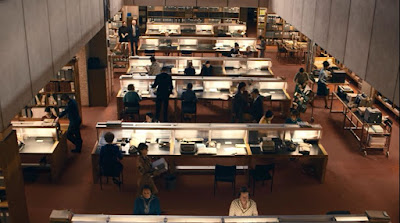 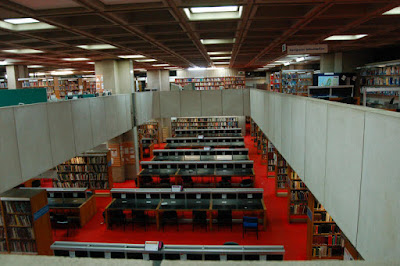 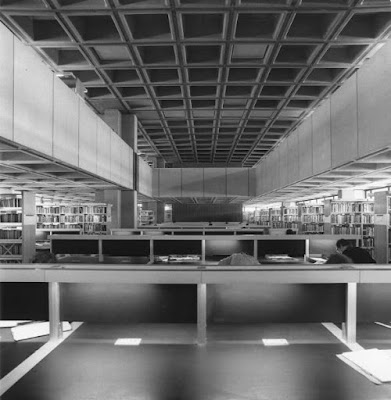 The Game is literally the last opportunity to see inside the library and it is a pity that it actually shows how good it could have looked if the council had ever been bothered to look after it properly, clean it, light it, and so on. The library actually looks much better in The Game than it did in reality, and a major reason is that it is better lit, demonstrating that it was built before the 1970s oil crisis and so it would have been impossible to read in there by natural light. Mark my words, in, ooh, ten years when the uninspired buildings they are going to build there are being criticized, this show will be one of the things brought in a criticism of the library’s demolition. Personally I was for the proposed scheme of keeping the central ‘inverted ziggurat’ bit and using it as something else while demolishing the peripheral clutter and replanning the traffic around it. If you like architecture, you will like this show just for the library. I particularly like the way the setting in Birmingham is slightly manipulated to make it look more metropolitan.
I recommend The Game as essential viewing for Cold War geeks, Brummies, and brutalist architecture fans. 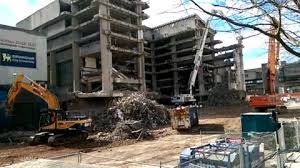