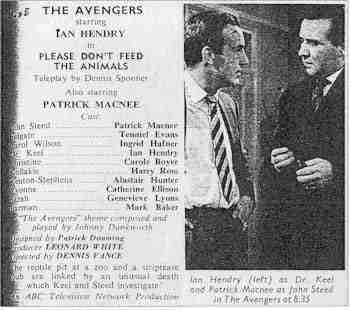 I go rushing back to the early sixties with a series 1 episode of The Avengers, of which fortunately more survives than does of the last one I posted about. That said, the synopsis I am basing this post on is based on surviving camera script according to the book and has some patches of dialogue too. I believe this is available in reconstructed form from Big Finish, if you like that sort of thing, but I haven't heard that myself.
My overall impression of this episode as I read the synopsis is the likelihood that this would have been exactly the sort of television that would have given Mary Whitehouse the screaming abjabs at the time. On the surface it is essentially a straightforward spy story (with a remarkably Avengers touch in the fact that information is transmitted at the zoo using a monkey) with much of its setting being in the underworld of a strip club. Thinking back to the Britain of the time, this was probably far more risque fifty years ago than it would be today, since a major concern was corruption in high places. The sexual revolution probably wasn't in full swing for most people yet, and no doubt Steed encouraging Keel to enjoy the sight of the girls at the club would have been very shocking to many people, symbolising the corruption of a worthy calling. Of course their attempt to blackmail Steed means that we would have seen him canoodling (apparently they go as far as kissing) with one of the girls, which was recorded as evidence. Of course his 'wife' would not have been concerned at all about this dalliance! All of this would probably have been considered very racy at the time.
I think what I like best about this episode is actually the juxtaposition of the strip club, with its underworld associations, with the setting of the zoo, which can only be intended to bring up images of family days out and childhood. This is an excellent contrast to make and must have been incredibly effective: for the first time I'm actually finding a real sense of regret that I will never see these Avengers episodes I am posting about here.
A further very sixties element is the influence of the spy genre: at least this is very sixties to my mind. I am still pondering to what extent the Bond books could have been influential on The Avengers, and while obviously Steed is here a much more workaday spy than James Bond, I feel that the spy genre was much more influential in the early days of The Avengers. I love that Steed is set up with a cover job in Whitehall and yet his bosses seem to have no objection to him roping in a complete amateur. This is perhaps one of the things which makes the early days of The Avengers more dated than the unreality-oriented episodes of the later series, that this was the age of the amateur, and it is surely inconceivable now that amateurs would be drafted in in the way they are in The Avengers. Another example of this is the owner of Brinkley House Zoo; apart from the ethical concerns about zoos nowadays, he is also an amateur in the sense that it is something he started up after he left the army and they have never really had as much money for animals as they would like.
That said, Renton-Stephens, the owner of the zoo, is exactly the kind of enthusiast who populates the later series of The Avengers in such abundance. Another stereotyped character is Kollakis the indisputably foreign, and therefore dodgy, owner of the strip club, who is behind the blackmail. These two characters, in addition to the eccentric zoo setting for the passing of messages, give a touch of the later Avengers to this show, in addition to the series 1 grittiness of the strip club/spying/blackmailing routine.
In conclusion, a gritty, demi-mondaine series 1 episode, which nonetheless shows signs of The Avengers to come in future series.
Image credit: http://deadline.theavengers.tv/images/keel11.jpg
60s TV The Avengers