Doctor Who: The War Machines (revisited) 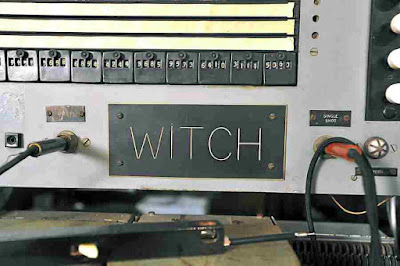 Since the majority of hits to this blog are from places other than the UK perhaps I had better begin this post by apologising for my compatriots. It is #notinmyname that we are leaving Europe, in fact it's nothing but an embarrassment.
Which is almost true of my last post on this First Doctor adventure ( here ), which I'm slightly ashamed of on re-reading it. I suddenly found a new, sealed, DVD of this show amongst my library (can't think where it came from, obviously by rogue computer technology) and decided to give it another go. Much of what I wrote about it the first time still stands, in terms of the dead sixties fear of encroaching technology. Ironically of course, it is only the connection of computers all over the world which means you are reading this, which would have seemed like an impossible dream of the future at the time.
On rewatching this show I am finding the mixture of technology and non-science quite interesting. I love it that the feared take over by computer is in part achieved by mind control, by a mechanism which isn't explained, but must have been fairly frightening at the time. The sixties were of course a time of explosion of interest in the paranormal, magic and paganism, as part of the larger questioning of received authority and values. The name of the computer of course recalls an ancient European pagan god, and thus the show presses historical buttons for Europeans. In a more sinister vein of course, Wotan, Odin or Woden was in the European pantheon hijacked by the Nazis and hijacked from respectable heathens by neo-Nazis ever since. This leads to a distinctly complicated collection of associations woven for the viewer by this adventure. In an interesting opposition to the contemporary  fear of the computer, it was actually quite usual at the time to give computers names - that is bearing in mind that they would usually take up a whole room at the time. A local example to me was the Wolverhampton Instrument for Teaching Computing from Harwell, whose acronym was WITCH ( https://en.m.wikipedia.org/wiki/Harwell_computer ). If you happen to be at Bletchley Park you can see that one in operation to this day ( http://www.expressandstar.com/news/2012/11/21/re-boot-for-worlds-oldest-computer/25396935/ ). Of course this personification of the computer is wonderfully parodied in the Avengers episode Who Killed George XR/40? Ironically the Doctor falls into this language as well, when he speaks of paralysing the war machine's 'nervous system'.
I stand by my original criticism that the actual war machines themselves are a let-down because they are nowhere near scary enough. They don't elicit any sumpathy, simply being machines, either. On rewatching this show I feel that its great redeeming feature is the 1960s milieu. The scenes of Swinging London are wonderfully evocative. Unfortunately the actual story hasn't aged well, largely because it is based on a contemporary imagination of impossibly futuristic technology, always a risky thing. Another difficult thing to pull off is that the adventure is set in our own world yet the technology is not real, so that it creates an unfortunate dissonance in the mind of the viewer. Of course it was probably not be anticipated that this show would be subjected to my cynicism fifty years later.
I suspect that probably the idea that the war machines attack failed because of incomplete programing would have been seen at the time as the merciful intervention of the still-necessary agency of the human. Of course that scene sounds differently to our ears now, where we are used to software conflicts and the everyday ridiculousness which is living with IT.
My conclusion on this one on a second viewing, is that it is an atmospheric first Doctor adventure. Its best asset and also worst failing is the contemporary setting of it. I feel this one may be best watched with at least a sympathetic eye to how people saw technology in the 1960s, or at best a view to reminiscing about the London of the time. The plot is a straightforward conflict and resolution one. The print is very well restored both vision and audio-wise. The adventure is also exactly right at four episodes long. I would certainly not say not to watch this, but you will have to suspend disbelief when you do.
Image credit: http://www.expressandstar.com/news/2012/11/21/re-boot-for-worlds-oldest-computer/25396935/
60s TV Doctor Who