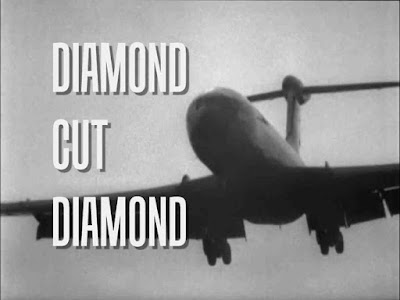 Another series 1 Avengers episode of which very little remains, and so I must do my opining on the basis of reconstructions and theory, and so must begin with a ‘disclaimer’ that this post will be a short one, but still longer than much that is written about this episode on the internet. First things first: what strikes me as most important about this story is the setting (no pun intended) in the world of diamond smuggling and air flight. Of course I am having to use my imagination here, but I would think that this setting places this Avengers episode in the worlds of luxury and high living right from the word go, since at this time cheap air flight would have still been a dream for many people. Similarly, diamonds have at all times automatically spelled a world of luxury and privilege.
My second thoughts are the fact that every synopsis of this show I have read includes the very specific fact that Steed is set up in a bungalow near an airfield. I have tried to rack my mind for any significance in this and failed to find any, but I still think it interesting that the nature of the home has somehow survived into the synopsis. Once again attempting to read this show through the eyes of the time as far as I can, the fact of a secret agent being set up in a domestic setting like that would immediately spell the world of Cold Ward espionage, although of course in this case it isn’t about espionage at all. That said, the figure of Steed is interesting here, and his specific role. The fact that he is set up as a fake air steward by his boss One Ten indicates that he is more than a shadowy figure appearing out of the woodwork; he is already developing into a figure with a structure behind him. The fact that this structure is using one of its men to stop a diamond smuggling ring indicates that the Western way of life and privilege is being defended.
Nor is Steed the rather louche figure he can come across in the earlier series. In my opinion he gives this impression right up to Venus Smith era shows, where he can frankly seem a bit of a dirty old man. Obviously no script survives to give an impression of him, but his liaison with a nurse in this episode need not be unsavoury. The fact that she is sometimes described as a pretty young nurse doesn’t really indicate her role in this show or come from the surviving minimal evidence of Steed’s relationship with her. I think her and Dr Collard’s roles as smugglers are actually more interesting, since they invert the literally life-saving role played by Keel in this show, and the medical figures play an interesting counterpoint to the dangerous people Steed is working amongst and the fact that he has been placed in that dangerous position by his own superiors. This is a reversal of the usual role of Steed in the earlier series, where he frequently puts other people in very dangerous positions and scarcely seems bothered about it.
What I hadn’t anticipated when I started this series of posts was that they would have me absolutely itching to see Series 1, if only because of how little remains of some of the episodes! This one helps to fill in what Steed was in the earlier series, and he gets a more important role than the shadowy figure who inspires Keel to avenge, which he was in some of the early Avengers.
Image credit: dissolute.com.au
60s TV The Avengers