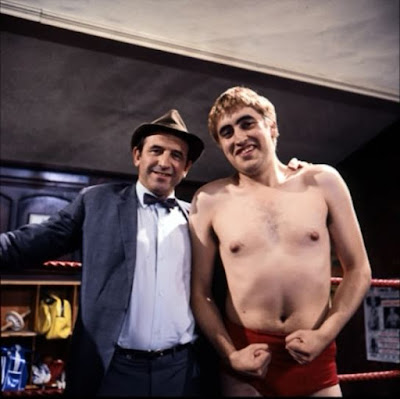 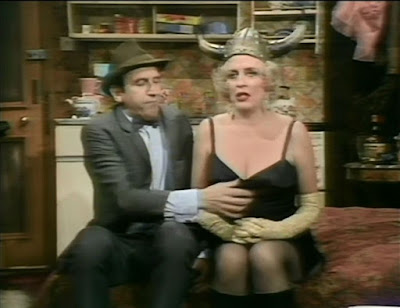 I see from the sparcity of information on the internet that this TV show is both little-known, and in fact was unsuccessful at the time of broadcast. The material is not promising, true: Leonard Rossiter plays an out-of-luck wrestling promoter, who takes on what he thinks is a dead loser so that he can make money from bribes from the other side. The trouble is his protégé turns out to be preternaturally gifted at wrestling, despite being unpromising material. This may sound as if it is Rigsby-does-wrestling, and indeed it can seem like that, because of course on one level Rossiter is always Rossiter and never anybody else.
But despite being so apparently unpromising, this show is excellent. This is of course due to excellent writing by funny man par excellence Alan Coren, one time editor of Punch, which adds a whole sophistication and subtlety lacking in, say, Rising Damp. The uninspiring base plot is enlivened by a series of hilarious vignettes: the scenes where they meet the queens in the theatrical guesthouse and Rossiter talking to a prostitute spring to mind. This show has genuinely made me laugh out loud with a proper belly laugh, and few shows, least of all ‘unsuccessful ones’, can do that.
Visually the show shows the full awfulness of the travelling life of any showman of any description. The sets remind me very much of staying in a B&B at the end of the 1970s with my dad – the colour palette is like mud and nothing is new. I have only two criticisms – one that the Foskett character played by Rossiter is just slightly too like Rigsby in some places, particularly in a episode of racism. I would reiterate my repeated observation that you don’t notice a really good actor, who will take on the character he is acting. It is too noticeable that this is Leonard Rossiter.
The other criticism is on a different level. I have also written here that I do not expect TV shows of 30 or more years ago to have the kind of quality of picture that you would expect of modern shows, in fact I rather like the less-technical effect of old shows, much as many people find vinyl preferable to CDs or digital. The problem with this show is that it has obviously suffered badly – one episode is missing completely, for example. The others claim to be restored, and I have to say that this is not up to the usual standards of Network. I still have not got to the end of the first episode because the sound is so patchy that it is impossible to listen to. That sound problem is not evident on the other episodes, but the picture is not restored up to the level I would normally expect. I am using two pictures to illustrate the actual picture quality; one is from the gallery on the disc, presumably a production still, and the other is an actual capture of Rossiter with the prosititute from the show. If I have to come to s final judgement on the picture quality, it would not be a deal-breaker for me, but the sound combined with the picture, combine to a problem which indicate substandard to me. I would prefer a more-restored picture with, say, a comment on the archival nature of the sound. I hope this will be corrected on any future releases of this disc, but judging by the reviews on amazon.co.uk which advise people not to buy this because of the sound quality, I would doubt there will be future releases.
So all in all, despite contemporary lack of success and lack of reputation, this is an excellent show marked by writing of real quality which distinguishes an unpromising plot. The DVD release is marred by a sound quality which makes it impossible to listen through the first episode. So all in all, I would not dissuade people from buying this show, but to be wary not to expect too good quality, and if it is re-released I would hope the quality will be worked on.
70s TV Topless on TV