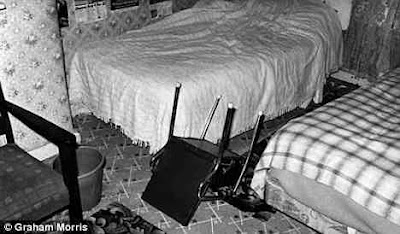 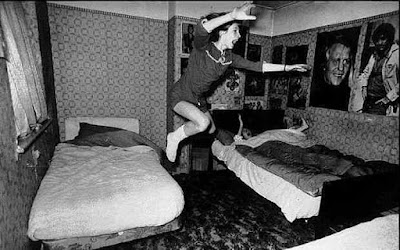 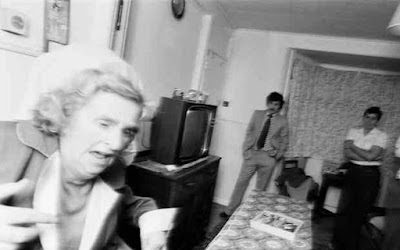 Christmas is coming and true to form I’m getting as close to being Christmassy as I’m ever going to be by posting about a ghost story. It may seem like this broadcast is way outside my comfort zone of usually 40+ years old TV, but I have always had a fascination with anything which could come under the heading of weird. I am keenly awaiting the release of the forthcoming documentary on Borley Rectory, since that along with this story was one of the formative influences of my young weird life. Also ‘the paranormal’ may be said to come under the usual definition of ‘cult’ rather than my own definition, of anything I like!
This is a show which rightly claims to be based on a true story, of a family tormented after the daughters began playing with a Ouija board. It is one of the more high-profile haunting stories in British psychical lore, and is the more effective for having taken place in an urban area in modern times and is therefore free of the usual paraphernalia of ghost stories. Even allowing for some dramatic license in making the story into a modern TV mini-series, this show is not a bad adaptation of the original story by any means. It is paced exactly right to give the correct fear. It even-handedly correctly places the story in its context of adolescence and budding sexuality without becoming prurient in any way. The effects are not over-done in any way. Apart from the few quibbles below, I literally cannot fault this production and would recommend it to anyone for a Christmas ghost story.
My main problem with it is that it slightly takes the family’s situation out of its correct setting. Of course this would only be an issue for someone who read the original book or has seen photographs of the actual house. The house in which it is set is rather more upmarket than the original council house in which the family lived. I have included period photographs to illustrate the real circumstances in which they lived. The problem with the house in this show is that while it is shown as unkempt from outside, the interior is an accurate setting of 1970s furniture. This is the only point at which it doesn’t add up: a family who either couldn’t to paint the outside of their house or were too distracted by other things, also would not have had a contemporary interior. And of course this is borne out by the contemporary photographs. Judging by the patterns, I would date the lino and some furnishings in the house from the 1950s or before. This is a family which was clearly in big trouble, including financial, and there seems to be a tendency in modern productions to avoid the realistic set. This is an unfortunate fault because it makes the story fail to add up, even if you are not familiar with the original story.
What accurately comes across is how completely distressed was everybody involved in the case. It was not so much a broken family as a fractured one. In addition to the father leaving and the elder son being ‘away at school’, the family went on to experience mental illness and young death from cancer. Grosse, the man investigating, was also in mid-bereavement, and this production accurately portrays the way in which there is no way in which this could have been approached objectively.
I like Timothy Spall’s portrayal of a man who is clearly very ill. He sounds as if he smokes about 80 a day, and I cannot fault his portrayal, except to say that I feel it might be slightly overdone at times and the other actors have far more subtle presences. There is a very real sense in which this production makes the story the story of Maurice Grosse, rather than the story of the Enfield poltergeist, which surely has more than enough material in itself.
These faults apart, I cannot recommend this show too highly and commend it as an even-handed approach of a story which more than anything else would lend itself to hysteria.
Image credits: Telegraph and Daily Mail
2010s TV The Enfield Haunting