Batman and The Avengers 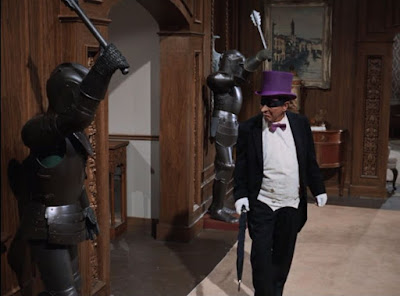 I am watching the first series of Batman (1966). I consoled myself for the reduced-size reopening without a conveyor belt of my favourite sushi restaurant (who the hell picks sushi off a menu?) by buying the boxed set, expecting a diversionary trip down memory lane and some very lightweight viewing indeed, but of course it's set me off thinking. I watched Batman in my childhood, although it was after the 1960s. Since I must have been very young and I remember singing along to the theme tune (truth to tell, it's hard to stop myself doing it even now), and making the sound effects. It must have been before I encountered The Avengers for the first time, which was on the advent of Channel Four in the UK.

That said, on revisiting it, Batman reminds me so much of The Avengers. I have Googled this connection at length and have been unable to find anything on the internet drawing parallels between the two series, although naturally this search is necessarily complicated by the ongoing Batman franchise and the existence of another set of Avengers. I have been trying to formulate a theory around the possible influence, which naturally must stick to the historical facts. It is not very likely that Batman the series was influenced by the fourth series of The Avengers, the first really to ramp up the weirdness, since The Avengers series premiered in October 1965 in the UK, and the first series of Batman premiered in January 1966, in the UK. Batman must have been at least well under production, or at the very least written, as the fourth series of The Avengers appeared on the screen on the other side of the pond. I don't believe it was exported at that time either, so it would have required a writer – a very influential one at that – to have seen the show in the UK and also been writing for Batman for the Avengers to have influenced Batman. I think it more likely that since Batman first appeared in 1939, with his own nominal comic starting 1940, if one show influenced the other it was more likely to be Batman influencing The Avengers.
The most obvious likeness between the two shows is in the area of unreality. The whole point of The Avengers is that it is not real, and if Steed were seen in a real situation he would appear like a caricature. Batman takes this caricature to a whole different level, except given its comic book origins, in many ways what is being parodied is the comic book idiom.
The likeness starts for me with the baddies. The parody and campiness of Batman may seem to be extreme in comparison to that of The Avengers, but in terms of weirdness the baddies actually compare. Remember how the baddies in the Avengers are always megalomaniacs who plan to conquer the whole world by such things as cats' collars? That obsession with cats isn't so far removed from an obsession with jokes or coldness. The Penguin and his obsession with umbrellas takes up a repeated motif of umbrellas used in several episodes of The Avengers, in addition to being a seminal aspect of the Steed figure.
And I think that is what most makes the connection for me – Batman actually uses the same visual language as The Avengers. It is not for nothing that Batman and Robin's alter egos live in a panelled manor house with an English butler – this is exactly the same visual language as that of The Avengers! The panelled manor spells Establishment, solidity. I have deliberately chosen the screen cap which illustrates this post because it shows the way in which the villains appear in the image of respectability, as contravening it. The underlying moral lessons of Batman – Robin not going into a night club because he's too young, say – are another part of their characterisation as respectable figures. The entire point of the villains is that they break the conventions and rules of respectable people. This is exactly the way in which The Avengers paints its villains, frequently putting them in a setting of contravened respectability, old families gone rotten, and so on. I have even been keeping an eye on the books in the various scenes – obviously it is not very likely that Batman would use the Steed's library books from whatever theatrical supplier in Britain they were hired for numerous ITC series, but the leather-bound books have the same purpose: they spell solidity, learning, and so on.
There are two ways in which Batman differs markedly from the world of The Avengers. The first is in the approach to technology, which almost completely lacks the ambivalence found in British television of the era. In Batman, the duo of course use technology at length to help them in their crusades; in The Avengers this happens rarely or never. I feel this probably reflects different attitudes to technology on either side of the Atlantic at the time, but of course wouldn't want to make too much of this generalisation.
That of course relates to the other major difference, which is that the world of Batman is very much American despite borrowing things which would spell olde Englishe respectability for Americans, but which are sometimes just plain wrong for Brits. There is a scene in which the English butler proffers iced tea, for example, and this is just plain wrong. Tea in the US in a markedly different things from here to this day. That said, this use of the language of dream English solidity is using the same symbols used in The Avengers to refer to the same thing, only from a native point of view.
Naturally this theory of mine is one which I have dreamed up as I have been cooking this evening with Batman playing in the background. And of course if anyone is able to point me in the direction of other comparisons of the two shows on the internet I would be delighted to hear them.
60s TV Batman The Avengers