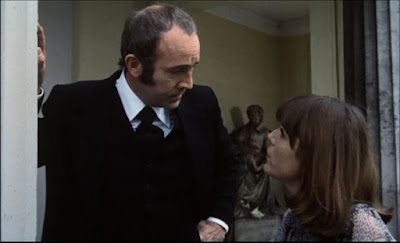 This film may seem like a departure from the normal televisual delights blogged about here, but I am actually writing this piece because this film is worthy of probably the highest approbation I have ever given here: it is almost like an episode of The Avengers. It is necessary of course, to ignore the fact that Diana Rigg plays the baddie's daughter, and the baddie's ultimate target is played by Ian Hendry, but the plot itself is worthy of The Avengers:

'Shakespearean actor Edward Lionheart (Vincent Price) appears to have committed suicide by diving into the Thames, after being humiliated at an awards ceremony. But he has been secretly rescued by vagrants, who welcome him into their circle. Weakened by meths-addiction, they prove to be a docile crew, that he will use in a campaign of revenge on the drama-critics who failed to salute his genius.
'Lionheart plans to destroy his critics in a series of poetic killings, based on classic Shakespearean murder-scenes. So one of them is depatched on the Ides of March, like Julius Caesar. Another has his heart cut out, referencing Shylock's 'pound of flesh'. Some of the murders are also linked to the seven deadly sins. One critic, noted for envy, is tricked into murdering his wife in a jealous rage, like Othello, before being jailed for life. Another one, noted for drunkenness, is drowned in a cask of wine, like Clarence in Richard III.
'Meanwhile Lionheart's daughter Edwina has been arrested as the chief suspect, and he needs to reveal himself in order to save her. In the final drama, he orders his chief critic Devlin to give him the coveted award in order to spare his life. But he refuses, and Lionheart plans to put out his eyes with red-hot daggers, as with Gloucester in King Lear. His contraption gets stuck, however, just as the police arrive to save Devlin. To thwart them, Lionheart sets fire to the theatre, and in the confusion, one of the vagrants kills Edwina with the award statuette, unwittingly casting her in the role of Cordelia. Lionheart retreats, carrying her body to the roof and delivering Lear's final monologue before the roof caves in, sending him to his death. Devlin comments "You must admit he did know how to make an exit."' (https://en.m.wikipedia.org/wiki/Theatre_of_Blood)
Brim-full of eccentrics, odd theatrical characters, unusual scenes, hatred, lunacy, it is extraordinary to find a film of the horror genre set in a world so close to Avengerland. In fact it has made me ask myself whether it couldn't possibly actually be parodying The Avengers, in a strange postmodern reversal of the way in which The Avengers parodied other genres. Certainly, the Avengers never made the mistake of setting an episode in the theatre – the fiction that is Steed would have looked far too artificial in the world of greasepaint, but if it had I feel that this would be very much an Avengerland version of the theatre.
In a strange way it helps that the cast of this film is like a roll call of big names of the time – normally my dislike for familiar faces would make me hate that, but once again it works by making it impossible to forget that the sort of tensions among actors and hatred for critics depicted in the film, are actually the daily life of the thespian. In fact I found myself looking around the cast and wondering what level of animosity they could manage to conjure up among themselves!
Despite its Avengersesque world view, of course Theatre of Blood differs in one important way – the violence is very real and very graphic, in a way it never was in the Avengers. This film can manage to be both very funny and horrifying at the same time – the scene where one of the critics is force-fed a pie made of his dogs is particularly revolting. This comes as a shock against the theatrical, privileged, world in which the film is set, very different from the stereotypical (to me – I'm not a great fan of horror) settings of the horror film. Visually the film looks very much like the sort of scenes depicted in The New Avengers or The Professionals, and apparently is unusual in being filmed almost completely on location rather than in studio. Visually it is superbly 1970s – step this way to see the shag pile carpet, and Ian Hendry in a frilly evening shirt in a colour which may well be best described as lavender. The film also doesn't feel like a simple horror film – there are elements of the detective genre as well.
If I have one criticism it would have to be that I don't think Diana Rigg is used nearly enough – obviously this is completely personal. That said, while she has the perfect foil in Vincent Price, you can't fail but notice her when she is with the other actors, so perhaps it was to get her appearances in proportion. A plot fault is that it becomes clear as the film progresses, that as Lionheart's daughter, the fact that she was sympathetic to him must have been known to all of the critics, because of the way he appeared to kill himself. The fault is that obviously suspicion was going to fall on her. Price is of course superlative as an embittered Shakespearean actor: he overdoes it to exactly the right degree.
All in all, although it isn't cult TV as such, and so purists may feel it has no place here, this film is an excellent addition to the library of anyone who loves The Avengers.