Apartheid in The Prisoner: Dance of the Dead 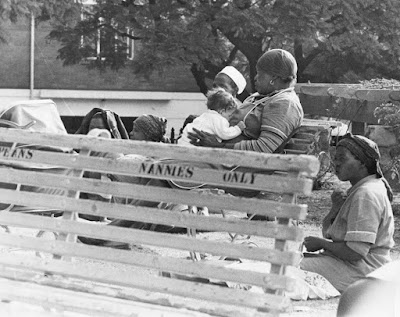 I feel this episode of The Prisoner may best encapsulate what it would have been like to live under apartheid. The ones we have seen so far have, as it were, represented apartheid on a policy level, and this one indicates the effects of those policies on individual lives. This not only perfectly reflects the apartheid government's approach: passing laws to perpetrate injustice, and letting them have their effect. '[His room is] the only place he can ever go, ' says Number 2, and that room encapsulates private life, not just in the sense of location or a racial classification, but in terms of ones own life. Owning a pet, choosing ones own clothes, who one is – these are the things that are affected by a totalitarian regime.

Nor for nothing is the reference to the dead of relevance. I cannot be sure whether it would be anachronistic to refer to the apartheid regime's notorious death squads in this connection. Certainly the earliest news reference to them I have been able to find online has been in the 1980s, after Botha's 'state of emergency' was declared. I have found reports of police brutality going back to the 1970s, after the notorious John Vorster police station opened, but I have been unable to find a contemporary source that would have provided the basis for references to death and disappearance for this episode. That said, it was clear to some at least of the inhabitants of South Africa in the1960s that they were not experiencing the rule of a benevolent law:
'...[M]any families first got in touch with the T[Ruth and] R[econciliation] C[ommission] because they could not even be certain that their sons, husbands or brothers had died. During the apartheid years, when so many took up arms in the fight against a divided society, hundreds of those killed in clashes with police, or executed later for their role in the fighting, were dumped in anonymous graves far from their homes.
'Between 1960 and 1990, around 135 political prisoners were executed for political offences in South Africa, but an estimated 21,000 died in political violence during the struggle. These long years were also characterised by in-fighting stoked by the state, which set activists and agitators from across the country against each other.
'As many of these activists had travelled hundreds of miles from their homes to work and campaign in cities, there was little chance of their families finding them if they "disappeared" in mysterious circumstances.' (Source)
It was more or less at the time this episode was made that apartheid was actually at its high point (once the 1970s dawned, the completely engineered economy began to crumble since even diamond wealth couldn't make it compete internationally). Such things as the control of the media and spying, many of which only became known later, are already present in this episode. Perhaps it reflects a historical understanding of the sort of things that totalitarian regimes do to support themselves.
But perhaps the moment which best encapsulates the apartheid allusion is where Number 6 is given his 'costume' of his ordinary clothes to wear at the ball. The fact that people were given costumes rather than choosing them, and referred to only by their allocated numbers rather than their names, is perhaps a clear reference to the apartheid regimes system of racial classifications, which could at times be as Wonderland as anything in The Village:
'Eleven-year-old Sandra Laing, who was White, then declared Coloured and has now been classified White again, does not quite understand what has happened to her.' (Sunday Times, August 6, 1967, cited in Ben MacLennan: Apartheid The Lighter Side, Chameleon Press, Plumstead, 1990, p. 13)
60s TV Apartheid in The Prisoner The Prisoner