Apartheid in The Prisoner: The Schizoid Man 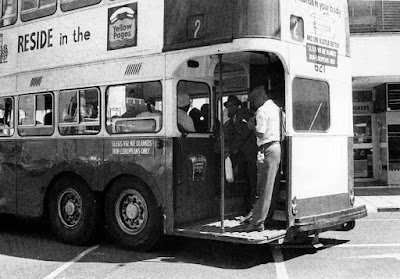 In my introduction to this series I commented that I didn't really want to get drawn into the interminable discussion among fans of The Prisoner, about the black or white blazers and black or white number badges. It would, however, be churlish not to mention the matter at all in connection with this episode. My personal conclusion, having dipped into this argument from both sides over the years, is that it is impossible to come to any conclusion about the significance of the badges. In fact I would theorise that they could even be one of the little things in the series intended to lead to fruitless discussion and never susceptible of a final conclusion. My personal opinion about the blazers in this episode would of course be that the whole point of this episode, including even its name, is that of a split or division, which in this episode becomes deliberately confused so that it is impossible to tell who is Number 6 or Number 12. Naturally it is always possible to tell Number 24 apart.

The issue of identification by whichever means does, however, have a more complex application to the ideas underlying South African apartheid, and so it is actually very easy to read a moral about apartheid into this episode. The issue is of course around identity, knowledge, ways of knowing, and confusion. The moral is itself a 'schizoid' one: if you try rigidly to divide and label people by whatever means, and then also try to change these rigid divisions, the only person you will end up confusing is yourself. To give another real apartheid-era example of exactly this situation where it becomes ridiculous:
'A new bus apartheid system of seating will come into force on some Peninsula routes on Monday. In the new system the front four rows of seats and the longitudinal seats over the off-side wheel in the lower saloon are reserved for Europeans, and the long seats over the near-side wheel for non-Europeans. The rest of the seats in the lower saloon and all seats in the upper saloon are for all classes. The system changes slightly on Sundays when non-Europeans have both of the long seats over the rear wheels, the Europeans having the first four rows. The trunk-route from Wynberg to Sea Point will be segregated only between the city and Sea Point, conductors changing the boards before reaching the city stop at the Waldorf. The Europeans-only service between the Sea Point and Diep River will be modified by the dropping of the Sea Point to Cape Town section. This service will be withdrawn on Saturday, August 22. – Cape Times, August 18 1959. In an interview a few days later the manager of City Tramways denied that people were confused by the new arrangement.' (cited in Ben MacLennan: Apartheid The Lighter Side. Chameleon Press, Plumstead, 1990, p. 29)
In fact the fact that Number 6 can pull the wool over the eyes of his captors in this episode (albeit not winning) seems to me a perfect image of what actually happened in apartheid. Remember that the 1960s were the time when apartheid was at its peak, the South African economy was at its most successful ever, and the cracks had not yet started appearing, as they did in the 1970s and '80s. Had this show been made at the end of the 1980s, with at least one eye on making it possible to refer to South African apartheid, it would look quite different.
The Prisoner's approach to the 'shizoid' 1960s concerns of the primacy of Science, and yet the popularity of magic and everything 'alternative' is also strongly present here. In fact I feel that Number 6's psychic link with Number 24, which at one point trumps his captors' scientific approach, could be seen to refer to the condescending way in which colonial whites in Africa tended to look at black people. Once again there is a moral, and it is very simply that if you look on people as magically-thinking savages, you will tend to underestimate them. A recent example of that kind of thinking is found here, by a current South African pro-apartheid blogger (Caution: you will almost certainly find this offensive, I do myself):
'When one teaches blacks, it is not uncommon to find that they score well to very well in tests or exams where they have to repeat what they were taught. In fact it is almost well known amongst educators that blacks are better at this than whites.
'But when it comes to applying knowledge...when it comes to using logic, faultfinding and problem solving skills, blacks fall by the wayside. They just cannot do it.
'A black can pass all the theory exams to become a pilot, but put him in a simulator and subject him to crisis situations where he has to think rapidly, then one sees the cogs of the black cognitive system start flying all over the place. And I am talking about the one percent...the best of the best,. The other 99% are only good to dig ditches, provided they do not break the pick or spade.
'The proof is in the pudding [sic]. It is not as if the world is over run by Nobel Laureates for hard sciences like physics or chemistry. How many black astro or nuclear physicists do you know?
[...]
'The most amazing thing is that no matter how well Blacks are educated, they never let go of their superstitious believes in the Tokoloshe, Muti witchcraft and ancestor worship. Blacks who hold high positions today such as ministers in parliament or judges...blacks who are engineers, still consult the witchdoctor on a regular basis. Blacks still run around and attack everyone, including their own with pangas.
'No amount of western education will ever be sufficient to change the African black savage into respectable human beings. They are what they are. We have to be honest with ourselves and with blacks and accept them them for who and what they are. We have to realise that our cultures will never be compatible.' Source
60s TV Apartheid in The Prisoner The Prisoner