The Strange World of Gurney Slade 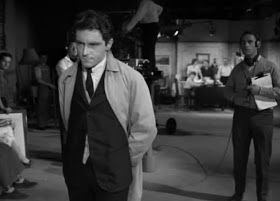 Anyone reading my last post, about Monty Python's Flying Circus, might have thought that I managed to deal with one of the greats of cult television in what was at best a low-key, if not sloppy, way. Naturally, the real purpose of that post was to bring the subject of Monty Python 'into the room', before I write about Gurney Slade. That is of course also the reason I delineate the TV comedy that I do like in that post.