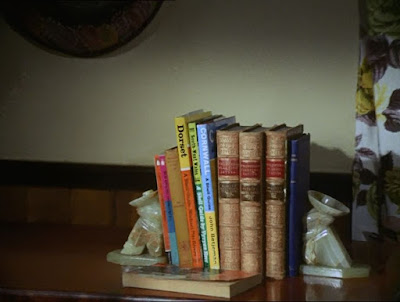 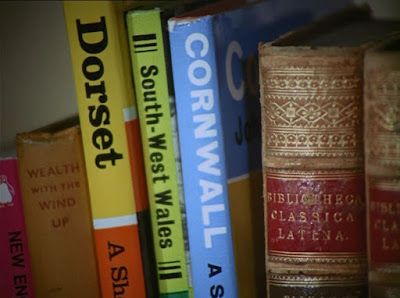 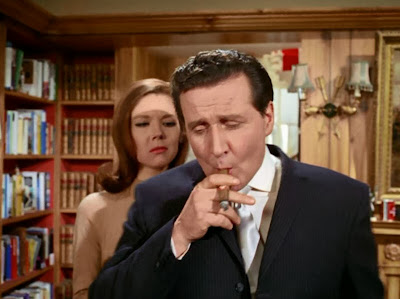 For many years I have wanted to know what the books were in Steed’s flat at 3 Stable Mews. I mean specifically the collection of uniformly-bound leather volumes, one of which he is seen reading in only one episode. It is evident that they are not just a random collection of brown-back books, because of the uniform binding. They are clearly a set, they were either bound all together or one at a time in imitation of the others, maybe even by the same binder. The number of them mean that they are unlikely to be a set of encyclopaedias or even a set of one of the English writers. I had always theorised that they could be court reports, bound magazines of a previous age, or a set of books uniformly bound; standard authors, type of thing.
Because these books have a very distinctive red and black band a little down the spine, I have taken the liberty of assuming they were the same set of books when I have seen something that looked like them appear in other TV series of the 1960s. If you want to see all the times I think I’ve glimpsed them you can click on the labels Steed’s Library on the web version of the blog. Sometimes they appear clearly as a set in other shows, and sometimes they appear mixed up with other leather-bound books in a representation of great literature. I cannot claim that I know they are the same books, this is merely a theory. I would also theorise that this particular set of leather-bound books belonged to a 1960s theatre or TV set prop firm, since they appear in both ABC and ITC shows, so were not specific to either of those companies.
One of the less popular shows I talk about here, judging by the page hits counter, is The Champions. I was very gratified to find when one watching one episode the other day that I could finally read the title on the spine, having tried to over and over again. I see that the title is Bibliotheca Classica Latina, and the volume of which I show the title is devoted to the Roman letter-writer Pliny. Although there are only two volumes shown in that episode of The Champions, they are clearly part of a much larger set, since the title describes them as a ‘library’ of Latin authors, and one of the volumes contains only Pliny, they must be part of a much larger set. They are also bound in the right way. Of course the evidence isn’t 100%, but in the absence of other evidence I conclude that I have found Steed’s library. Of course, even though you can’t ever see the titles in The Avengers, these Latin authors are exactly the sort of thing you would expect to find in Steed’s library. I’m even more delighted to discover, if you google the title, they are still in print (in publish on demand paperbacks) and can be downloaded volume by volume from the internet archive.
60s TV Steed's Library The Avengers The Champions