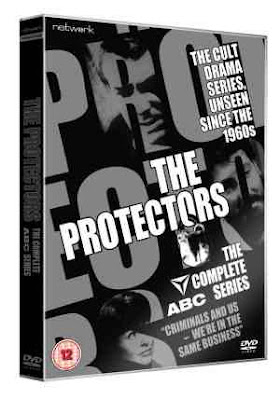 Some of what it pleases Wikipedia to call 'disambiguation' may be necessary at the beginning of this post, since this series brings us right to the heart of confusing television names world. This is a series broadcast by  ABC in 1964 [not this ABC nor yet this ABC In fact this has become confusing to such an extent that I have seen it theorised that the first reel of Hot Snow survives because it was returned to the wrong ABC and ended up in the States, rather than facing the almost certain destruction it would have faced here in Britain. Another confusion can be caused by the fact that there are no fewer than three TV series called The Protectors. I don't mean  the 1970s series  (I have tried to watch it, and although normally I take to ITC shows, I found it a drab 1970s luxury-setting spy show), nor yet do I mean  the 2009 series, which is far too new and not esoteric enough to be on my radar yet. I may be blogging about it in fifty years' time. Instead I mean  this one which is so recently re-released that it doesn't seem to have a Wikipedia page yet. Instead this basic information is from the Network page, which is also the same as the blurb on the back of the DVD box – that's right the box which illustrates this post:

'Meet The Protectors: Ian Souter, Robert Shoesmith and their Girl Friday, Heather Keys. Their motto: 'We Sell Security'. Their object: to prevent crime. Operating from a smart Marylebone office, they form a high-powered private investigation team dedicated to fighting crooks and forestalling crimes of all kinds in the twilight borderland between the underworld and the policeman's beat... This classic ABC adventure series stars former RSC player Andrew Faulds as the fiercely moral Souter, a Black Watch officer turned private detective; Michael Atkinson is fellow troubleshooter Shoesmith, an ex-policeman with an unnervingly acute understanding of the mind and methods of the criminal; Ann Morrish is secretary and confidante Heather, a former auctioneers' assistant with a sharp eye for art fakes and forgeries. Originally screened in 1964, this complete series has not been seen anywhere since its initial transmission.'

I may be making a judgement based entirely on my own niche television viewing, but it would seem to me to be a 1960s thing to name shows after what their protagonists do. Of course, given the lack of presence this show has on the internet, I'm imagining this, but given that this is also an ABC production, it wouldn't be too far a stretch to see this as an attempt to capitalise on the popularity of The Avengers. It sounds like it, at this length of time it even looks like it, yet is subtly different. As highlighted in the quote above, there are three protagonists in this show, rather than the doctor caught up in the underworld, and contacted by John Steed, who subsequently takes over the stage. Instead, The Protectors is very much set in the other extreme of the world of security. None of your London back streets here, rather the settings are in intelligent, privileged, society, at least by the standards of the 1960s. These are not also shows set up to be a Jason King-style escapism and a chance to see into the lifestyle of the rich and famous. These are movers and shakers, but it is still plain that their lives are far from perfect.
The role of women is incredibly different, which has highlighted for me how revolutionary The Avengers actually was, in its depiction of Cathy Gale. Women hold roles of leadership and power in this show, but it is always plain that there is some question as to whether they can manage them. The one woman in the team of Protectors is also described as a Girl Friday, and is plainly intended to be an assistant to the two men.
That said, the setting interpreted in the visual language of television is very definitely modern. The sets are clearly in a family lineage with the more modern sets used in The Avengers. I'm particularly reminded of the scene with the empty coffin in The Undertakers. Again I don't know that this particularly applies here because I don't have a source, but I have read that many of the sets for these black and white shows were actually painted in shades of grey and black, in fact purely designed for how they would show up on the screen. The design of the sets is accentuated by the imaginative use of lights and pattern. Something which is very frequently used is the device of light shining through suspended ceilings to create particular effects, a very effective device in the context. Titles are clearly from the same stable as Mrs Gale-era Avengers titles, with an excellent and catchy theme. Incidental music is atmospheric to the action of the show but doesn't distract from it. In common with most TV shows of this era, it would probably require more concentration than a lot of modern shows, while its pacing feels more leisurely than a modern show, but not boring by any manner of means.
Another major difference with The Avengers is the complete (so far as I have viewed) lack of a sexual dynamic. This is another aspect of this show that has really brought home to me how the continual sexual sparking between Steed and the various Avengers girls is something that must have been considered very go-ahead for the time.
The three main actors are real theatre and TV heavyweights. Full use is made of familiar actors of the time. Normally this irritates me, but it is a mark of the quality of the writing of this show and the actors' acting, that I can just think, 'That's so-and-so,' and ignore it. Familiar faces include Peter Bowles (several Avengers episodes, and of course To The Manor Born), Donald Hewlett ( It Ain't Half Hot Mum ), Elizabeth Shepherd ( The Corridor People, and of course she made a couple of episodes of The Avengers playing Mrs Peel), and Martin Miller (surely by this time he was completely typecast as a generic continental character as in Danger Man).
All in all, I'm finding it very difficult to criticise this show at all. Production values are probably slightly higher than Mrs Gale-era Avengers, stories – I haven't watched all of the discs yet – have different writers so I'm expecting a few duds along the way but so far I'm finding the plots convincing, and followable. It is another show which is bound to be viewed with a nostalgic eye, not just for the actors but for the way the world has changed in the fifty years since it was recorded. Oh, and I like the new Studio Canal jingle, much better than the one on my Avengers boxed set.
60s jobbing actors 70s TV The Protectors