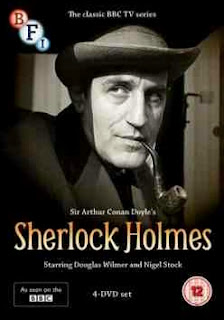 I am settled in in the city centre. It is nice to be able to pop to the World Famous Rag Market when I want any little oddment (what do you mean, how can it be world famous, you've heard of it haven't you?). The only disadvantage I have found so far is that I have been unable to find a decent chippy – there is one over the road from my door, but I was shocked to discover on the Food Standards Agency website that on a score of 5 as the best for hygiene, it is even possible to score zero! The light of my apartment lends itself to Victorian colours (the acres of magnolia are gradually being obliterated) and living near the last remaining court of back to back houses in Brum, in what would have been a teeming slum, my thoughts have turned towards the nineteenth century.
I was delighted, then, to discover a boxed set of Sherlock Holmes mysteries, in which star an actor I had never heard of, Douglas Wilmer. They were BBC productions and date from the 1960s, so are definitely in my time period. They have, however, caused me to discover the full depths of Holmesian fundamentalism there are out there. I have read of Wilmer being described as 'the only actor who got it right,' and generally the best Holmes actor ever. This is obviously a very tall order, and incredibly high praise, considering how many actors have played Holmes. For myself I like to think that different actors can bring out different aspects of Holmes's character. For all that I don't particularly take to Mr Cumberbatch as an actor, finding his own presence too much, I appreciate the way he plays Holmes. He plays it very much as if Holmes has the INFJ personality in the Myers-Briggs personality indicator, which he probably would have done. He also correctly accentuates Holmes's more antisocial traits, such as his habits at home and knack of saying the wrong thing, which would probably put Holmes on the autistic spectrum nowadays. The Basil Rathbone series, while being infiltrated with wartime propaganda, allow a view of how golden age cinema saw Holmes; he is correctly cerebral to my mind. He also brings out the crueller aspects of his attitude to Watson – these are correctly there in the character, to my mind, but don't stop me wanting to slap him. I have recently seen Rupert Everett as Holmes for the first time: I like very much the way he brings to the fore the foot-stamping teenager elements of Holmes's personality. I would imagine that most of the fans wouldn't like Everett in the role for that reason, but I feel her brings out something that is genuinely there in the character. My personal favourite actor in the role so far is Peter Cushing – he is the most cerebral I can think of, while also being kindly. The cerebral aspect is unfortunately over-emphasised, to my mind, by Jeremy Brett, resulting in an overly cold performance.
Despite all this, I can't think why people would describe Wilmer as the only actor who got Holmes right. Perhaps I'd better say that I don't actually object to his portrayal at all! But I feel something is missing. He is almost too polite to Watson – one of the major elements of Holmes's personality is that he is irritating to live with, rude to Watson, and positively antisocial! Wilmer plays him as too much of a gentleman, so that the sparks are missing. He is also not cold enough: he plays Holmes as clearly a very intelligent man, but there is too much warmth in his personality to play the thinking machine which is Holmes.
I realise that that slight criticism would be enough to ruin this series for some people, so perhaps I'd better say that the set will be going on the shelf to stay there for the foreseeable future, rather than into the heap of discs for sale in the cupboard. I think I probably warmed to the recent Cumberbatch series because it is an attempt at updating the stories to modern times – admittedly an invitation to violent argument – and as a rule I don't like period drama. I would usually much rather watch things set in their own time. I cannot fault this series as a period drama. Perhaps the fact that it is fifty years old and so have none of the swishness of modern CGI makes it far enough away in time from the present that it seems genuinely old. The sets, costumes, etc, none of them jar at any point. Nor is it overdone – for example what put me off Mad Men was the self-conscious smoking that went on. Real smokers aren't self-conscious about it, they just smoke.
Another thing this series has got exactly right is the pacing. I recently gave up watching the series called The Rivals of Sherlock Holmes because of the too-slow pacing and uneven story quality, which kept losing my attention. These shows remain relatively close to Conan Doyle's stories, and show the quality of his writing. The rivals of Sherlock Holmes were not rivals at all, it seems. My verdict on this series is that I will be keeping it: if it is really quality I will find myself watching them again at some point.
60s TV Sherlock Holmes