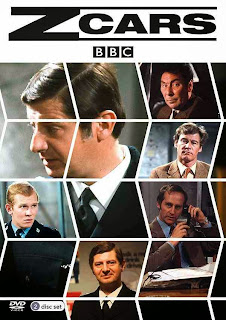 We're at the other end of the seventies here from most of the shows I've been looking at here: my personal TV memories begin at the end of the seventies, so I'm more familiar with programmes which may have begun in the seventies but continued into the eighties. I'm also familiar with some of the repeated sixties shows which were staples of eighties TV in the UK. Z-Cars takes me into completely alien territory since it was mostly broadcast before I was born, & once I came along I have no doubt it would have been well after my bed time. The illustration is of the DVD I have bought, of seventies-broadcast episodes. I'm surprised to discover how little survives of Z-Cars: it's taken me this long to suss this but I think there is a major difference between seventies TV & the sixties shows which are the staple of my viewing. This difference is demonstrated by the way whole series often survive from the seventies, particularly many of the series which frankly aren't that good. This difference in survival is underlain by a major difference of approach to the medium of television, being seen more as single theatre-style productions in the sixties (remember so much sixties Dr Who survives because of it being so widely exported while the original tapes were re-used in the UK). At some point policy changed to an archival approach undergirded my an understanding of television as repeatable. The point of this lengthy digression is that nowadays a shoebox twelve series would be in box sets but it is no longer possible to experience the whole of this show.
I'll happily own up to being on alien territory here but this show surprises me in all sorts of ways. It feels much different to the majority of the shows I've blogged about here, much less ephemeral, more theatrical, I could almost say more worthy. Minder, by way of comparison, could be left on in the background while doing something else, but Z-Cars seems to demand attention in a way characteristic of earlier television. If you don't pay attention to this one you'll miss something & be lost.
In my real/unreal dichotomy Z-Cars self-consciously aims for real & gritty in a way which I gather was unusual for the time. Naturally this is a completely personal opinion, & of course I've written about my problems with actors & accents on here before, but there is a major problem here. This show aspires to be 'northern', but only does this in a way perceived by people in the south of England, who particularly if they come from London, have a tendency to think that the Yorkshire moors start at Watford. Certainly accent-wise there is little to place this show anywhere more than generically in the north of England. I don't really have a dog in this fight as a Brummie, but I recognise Mancunian & Geordie accents. Yes, people move but dramatically this fails to give an impression of an integrated community, other than in a rather bizarre 'somewhere-up-there' way.
In fact Z-Cars isn't at all what I expected. I'd somehow got the impression there was much more action: perhaps this is how it was seen at the time. It doesn't help that in the first episode the caretaker from Grange Hill is keeping a shop with a generic northern accent!
Having said all this, Z-Cars has some strong positives: it is a solid dramatic police procedural. Sadly I doubt anyone unused either to the theatre or acclimatised to modern television could sit through it. Probably the episodes I've been watching have come from just the wrong time for modern viewers. The collars are huge, the cars memorable to me but antique to anyone younger, people smoke in the pub, there are no mobiles, & so on ad nauseam. It is 'old' but lacks the pounds, shillings & pence charm of older shows.
Incidentally, one of my colleagues decided to let slip yesterday that her maiden name was Garnett, causing me to roll around in laughter. Yes, if the discs show up, I'll go there, bravely pushing the boundaries of taste, which us what this blog is all about.
70s TV Probably not Cult TV