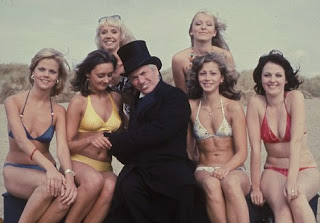 Yes, I know this is supposed to be about TV, but I happen to have the Dick Emery film, which includes his trademark characters & humour, & not the TV version, which I've tried to watch in the past & found hard-going. The DVD has recently come back into my possession when a friend had a clearout of her flat & pointed out that it was full of my stuff, as she cleared out her handbag of some random weird stuff, which I was delighted to see again.
The show actually ran from the 1960s to the 1980s, therefore including my target decade here. Emery came from a theatrical family, & the fact that this show can be described as vaudeville places it in a different era of entertainment:
'The show, which ran irregularly from 1963 to 1981, involved Emery dressing up as various characters, "a flamboyant cast of comic grotesques". These included the buck-toothed Church of England vicar, sex-starved, menopausal, man-eating spinster Hetty, and Clarence, an outrageously camp man who coined the catchphrase "Hello Honky Tonks". Other roles were gormless denim-clad bovver boy Screwsby (in a double act with his long suffering father, played by several actors including Roy Kinnear) where, each week, he would mess up and utter the catchphrase "Dad, I fink I got it wrong again", the crusty pensioner James Maynard Kitchener Lampwick, College (a genteel tramp whose real name was Lancelot Orpington Penrose) and Mandy, a busty peroxide blonde whose catchphrase, "Ooh, you are awful ... but I like you!" (given in response to a seemingly innocent remark made by her interviewer, played by Gordon Clyde, but perceived by her as ribald double entendre), preceded a hefty shove on the shoulder of the interviewer, and a prompt about-turn walk-off with a leg trip. "It was clever, pure vaudeville, in a television form." (Michael Grade).' (http://en.m.wikipedia.org/wiki/Dick_Emery)
I'm fascinated to discover that Emery had five wives, almost as many children, & many affairs & long-term partnerships. He also suffered from chronic low self-esteem & stage fright, which gave him real problems in his work. His close relationship with his mother caused problems in his marriages. To me these random facts suggest the traditional comic's complex character, with tears always just under the surface.
This combination of complex personality & a now-dated humour unfortunately combined with a rather patchy writing for the TV series. For that reason I actually prefer this film, which I approach as a window into a different world - I mean, none of the things mentioned in this crit would get on the TV these days:
'But is it funny? The sketches are very mixed. There were marvellous writers on the show – Barry Cryer, Harold Pinter, David Nobbs (the creator of Reginald Perrin), Mel Brooks, Marty Feldman and Dick Clement all had spells – who came up with some vintage comedy. But some of the scripts were awful. Watching now, you can see the punchlines coming and the canned laughter is irritating. The jokes about women's boobs, gay 'queens' and sex-starved housewives all seem musty. And for all the strong characters, there are others such as the exaggeratedly camp Quentin Crisp-alike Clarence and the Bovver Boy (Seventies Skinheads were actually scary this parody is pathetic rather than funny) that make you cringe.' (http://www.telegraph.co.uk/culture/tvandradio/10590018/Dick-Emery-the-neglected-superstar-of-TV-comedy.html)
Clearly the main difference between Emery & the other Seventies shows I've profiled is a totally different approach to the troubling events of the time. I do remember bovver boys being scary - that was the point. However Emery's humour nowadays seems to hit exactly the wrong note. The reason is, of course, that the world has changed. We have changed. We live differently & see things differently. It also seems to me that Emery's characters are so unreal that this show has to be approached almost as if it were fantasy.
So perhaps Emery is better approached as a romp down memory lane - to a world where all sorts of things happened that no longer do. Emery is seen on a building site. The tattooist doesn't wear gloves. Can you imagine? And these are just the start. The way of reminiscence keeps Emery firmly in the lens of history, which means his contemporary offensiveness can be seen in context & what is good in his work can be valued.
------------------
70s TV Dick Emery