The Avengers: The Mauritius Penny 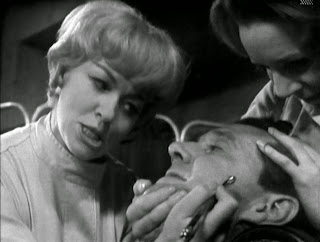 Picture credit: dissolute.com.au
I've moved house today - in great haste because my agent made a monumental balls up to the extent that I went round & took the keys off them until my belongings were removed! Anyway I'm set up in a nice flat in a nice part of the city where I can hear traffic (I can't sleep without traffic noise). Now if I could just suss out cooking electric life would be perfect & I'd only have to worry about selling my house rather than the truly present danger of starving to death!
The thought of cities & flats has led my thoughts to The Avengers, specifically the earlier series. The Mauritius Penny is actually one of my all-time favourite episodes, but I've been thinking of it in terms of its city setting. On reflection I think one of the errors the Avengers film made was to make the setting too rural & thereby downplay the citified interplay of people & interests that is actually essential to The Avengers. The reality in the 1960s & now is that the majority of British residents live in urban areas, & I think the film may have been drawing on the stately-home-and-village-fete stereotype too much.
The significance of the city setting to The Avengers cannot be overstated. For a start a city gives Steed & others the anonymity necessary to wander into criminal undertakings without being recognised. The city setting gives these earlier episodes a certain pace - I'll grant you that while I feel rural scenes increase as The Avengers wears on the pace remains the same & the characters are only ever really visitors to the country. The gentlemanly Steed is only ever really a city character - his trademark bowler & umbrella mark him out permanently as such. Steed's apartment in series 5 & 6 draws on a rural idyll, to my mind. His original apartment - as seen in this episode - & the middle one are uncompromisingly city settings. Of course Mrs Gale's apartment could only ever be found in a city. I mention these to underscore the native city setting of The avengers, until I've wrung perhaps every last drop from this whipping-horse.
This particular episode is one that could only take place in the city. The stamp shop is a real stroke of Avengers characterful scene-painting. I also love the Fascist dentist. I can fully sympathise with Steed's plight - the last time I went to the dentists myself I had to be sedated & at one point she actually told me I shouldn't be awake! I have a feeling that probably being actually killed with a dentist's drill would be a slow & messy business, although I love her continued use of dental jargon as she threatens Steed with it.
Nor is this episode short in other classic Avengers touches - the evil conspiracy is true Avengers, & places this episode clearly in the maniac-in-pursuit-of-world-domination (starting with compulsory dental inspections) category.
My one criticism of this episode is not the usual one - the face (& distinctive voice) most familiar to me personally is Alfred Burke. I'm delighted to say I saw him in this before I ever saw Public Eye, but while he is now associated with the latter role for me, I don't find his presence distracting. Rather my criticism would be that the show seems to have got lots of matters of historical fact about stamps completely wrong (see http://www.dissolute.com.au/the-avengers-tv-series/series-2/207-the-mauritius-penny.html). I don't notice this myself, not knowing about stamps, but I can see that watching this show would be a real irritation for a hard-core philatelist. These errors are surely of a sort which would be easily corrected by reference to public domain sources, & indicate a sloppiness about getting it right.
------------------
60s TV The Avengers