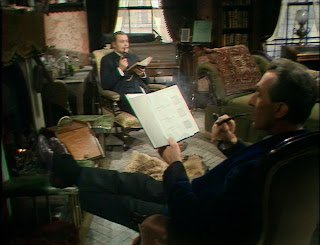 ...With Peter Cushing as Holmes, that is. I have been watching Sherlock Holmes a Game of Shadows while it has rained interminably today, & I can only call myself unimpressed. I have just realised how watching mainly or only classic TV sensitises one to CGI. The aura of unreality it imparts works in some films, but not for Holmes. It's also no use turning Holmes into an all-action figure: the whole point of turning to Holmes on the winter evenings is that it takes the reader or viewer to a Victorian London of hansom cabs & fog, a different pace. Holmes should go slow, & the all-action approach blunts his intellect. With my love for all things weird I did love the scene with the tarot cards.
This Holmes, however, has everything that is missing from the film. I feel Holmes is better filmed in a small-screen way, anyway. This one has the atmosphere, the feeling of stepping into a different world. It has been many decades since most English-speakers have read Holmes as a detective puzzle or been mystified at his methods, so I feel it is for this atmosphere people read Holmes.
And Holmes does a funny thing to people. Surely people can never have written letters to Hercule Poirot or Miss Marple? In many ways Holmes is as unreal as Poirot (Miss Marple will always be a more real character, to my mind), & I think his drug use should have made him dodgy to his Victorian audience, but people wrote to him endlessly, & I imagine still do. I have only recently read that when the Holmes craze started Baker Street didn't have a 221B, but that as soon as one was built the owner had to hire a secretary to deal with Holmes's correspondence!
There are marvellous touches in this one - Holmes's war of wits with Inspector Jones. I love Watson in love as well.
And to think that this was going to be a post on another Jason King!
------------------
60s TV Peter Cushing Sherlock Holmes