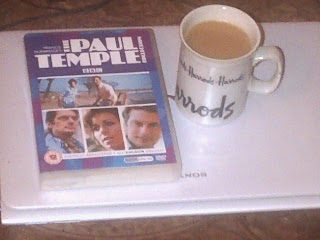 An attentive reader of this blog recently called it 'my go-to blog for Brit shows' (you know who you are, thank you) & so when I noticed I'd left the discs for this post sitting on my laptop next to a cup of tea in a Harrods mug, I had to snap it as the illustration for this ultra-British post. Here's the secret to perfect tea: everyone has their own pet method. After a lifetime of being a tea-first fanatic I have recently converted to milk-first.  Incidentally I made the tea with a bag in the mug, don't take sugar, & superstition would have it that the almost complete absence of bubbles on top indicates that buying a lottery ticket this week would be a waste of money. As it happens the largest audience for this blog is in the Ukraine (hello there) followed by the US, but I like to think we English people are as much of a mystery to non-English speakers as we are to Anglophones. Anyway back to the matter in hand...
Surely there can be nobody interested in the sort of vintage media talked about in this blog who has not heard of Paul Temple? But just in case anyone hasn't...
'Paul Temple is a fictional character created by English writer Francis Durbridge (1912–1998) for the BBC radio serial Send for Paul Temple in 1938. Temple is an amateur private detective and author of crime fiction. Together with his journalist wife (Louise Temple, née Harvey, affectionately known as "Steve" after her pen name "Steve Trent"), he solves "whodunnit" crimes with subtle, humorous dialogue and rare "action". Always the gentleman, his use of the phrase "by Timothy" was the nearest he ever got to swearing. Since 1938, the Temples have featured in over 30 BBC radio dramas, 12 serials for German radio, a BBC television series, four British feature films and several novels. In the Netherlands several of the radio plays were recorded with Dutch actors and with the main character's name translated to 'Paul Vlaanderen '. In addition, a Paul Temple comic strip featured in the London Evening News from the mid-1950s to the early 1960s.' (http://en.m.wikipedia.org/wiki/Paul_Temple)
I have loved the radio serials for a long time. In fact I've developed my own countercultural theory that Steve is a lesbian (sometimes I think she's lovers with Charlie) who actually runs all sorts of dodgy operations without Temple knowing. Every time he gets to know of one he blames the wrong person & Steve gets away with it again. The series is wonderfully open to parody, for example when they come across yet another dead body & Steve says, 'Is...he...?', it is all too easy to envision Temple saying, 'Don't look, darling, he's working class.' An exhaustive account of Paul Temple's multimedia appearances can be found at http://www.thrillingdetective.com/temple.html
Anyway my own imaginative involvement with the radio serial has made me avoid the TV series so far. The reviews on the internet are distinctly mixed for a start. Also I've never seen any of the films, which I suspect might suit Temple's style better.
This suspicion of mine about transplanting Temple from a Boy's Own 1930s/40s milieu to a contemporary milieu in the 1970s, I now realise, has been awakened in part by the cover of the DVD box. It looks very much like any standard 1970s show, but now I know the reason:
'This was a co-production by the BBC and Taurus films of Munich, West Germany, and was shown internationally. According to star Matthews, both Paul and Steve Temple became fashion icons of sorts, creating a style that was to be imitated in ITV's The Persuaders!, while, in America, Ros Drinkwater's role was reportedly emulated by Susan Saint James in McMillan & Wife and Stefanie Powers in Hart to Hart. According to Matthews, Drinkwater chose her own "very expensive" designer clothes for the part.
'Paul Temple used overseas locations in France, Malta, Germany and elsewhere. The series was intended to last for five years, but despite its popularity especially in Germany, the BBC withdrew prematurely.' (http://en.m.wikipedia.org/wiki/Paul_Temple_(TV_series))
The visual similarity to the style of The Persuaders is especially apparent. I'm inclined to say I don't like the updating of the Temples to the 1970s, but I'm not completely sure about that. What are missing are the elements of the novels & radio shows that made Paul Temple what it was: the upper-class attitudes, attitudes to the servants & criminal classes, & a plethora of cliffhangers in every episode. Given those essential ingredients there were clearly only two routes available - update using the characters or make it a period drama. Had it been the latter I really don't think I would have liked it, because I feel it would have stepped over a borderline into parody (certainly using this approach with Dick Barton was a complete disaster in my opinion - I'm referring to the series here: http://www.amazon.co.uk/gp/aw/d/B001PQQVS8/ref=mp_s_a_1_2?qid=1413488813&sr=8-2&pi=SL75).
So Paul Temple therefore ends up a rather different series from the original. It is perhaps more inspired by the original. If you accept this fact, Temple actually translates rather well to the 1970s as one of the jet set.
The plots are less generic Paul Temple & more generic 1970s action mystery series. It aims for sophistication very clearly, yet also manages at times to get real suspense & emotion from the viewer.
Watch this if you like the things I mention above: avoid it if you're in love with the radio series & can't envisage Paul Temple any other way. I have never seen any of the films myself, but now want to so I can see how he was translated to the silver screen.
------------------
70s TV Paul Temple