Allegory in The Prisoner: The Girl Who Was Death 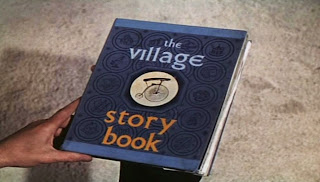 Since the focus of this series of posts is allegory, I'm quite keen to make everything in the episodes refer to something else if I possibly can. The Girl Who Was Death is another of those episodes which apparently take us out of the claustrophobic world of The Village. It is certainly one of my favourite episodes & seems to be beloved of the fans.
But I must start by demolishing the way this episode is normally approached. If you actually watch the opening few minutes, it is apparent that Number 6 has woken up in The Village again. This episode is therefore set in The Village. Similarly the scenes with the story book are so brief as to be easily missed - or at least overlooked if you're not paying attention - & clearly indicate the point made so often in The Prisoner, that nothing is real, & the show is entirely focussed on The Village when it comes down to it. In a sense, it's a reverse allegory, where everything outside of it refers in some way to The Village itself. The unreality of this episode explains some of the stranger things that happen, such as the car chase scene. I have read the strange twistings & turnings of that scene explained by rationalising that the woman is a witch! Much simpler for the whole thing to be a story - a Village-storybook-induced story. The unreality is reinforced by the use of back projection & sets which either just feel unreal or are parodies.
Here the references to things apparently outside the Village are clear enough - cricket, sauna, pub, numerous sexual references of a peculiarly sado-masochistic kind. All of these are everyday situations turned insidiously dangerous. Once again the power of The Village is everywhere, & they'll get you if they feel like it. I can only guess that advantage was taken of the strait-laced televisual mores of the time to use numerous sophisticated Freudian phallic or vaginal symbols. The vaginal symbols of course are included in the dangerous ones. It may also have been that the staunchly Catholic McGoohan wanted the sexual symbols to be disguised, or open to different interpretations. You can fall to your death in a pit, but the femme fatale who leads you there is the real trap! Far from being the straight comedy it is sometimes portrayed as, this episode is a warning to be on your guard.
Of course it can't be neglected that this episode sends up every staple of the spy-fi genre ever: reference is usually made to James Bond's amorous exploits. McGoohan was critical of the promiscuity & disinterestedness of spies in the genre: his Number 6 is the exact opposite of the spy who would work for any power as long as the martinis & pretty girls kept coming. Not only Bond but also Holmes, The Avengers (this episode just *feels* so Avengers) & all manner of other shows are criticised here.
There is a further allegorical twist. It's not mentioned, which is what makes it all the more painful when you think about it. There's a realisation to be undergone here: if you bear in mind who is Number 1 as you watch this, this apparently comical show becomes a harrowing exercise in self-knowledge for Number 6. Everything in this show is actually his creation, he is Number 1, he literally only has himself to blame.
------------------
60s TV Allegory in The Prisoner ITC The Prisoner