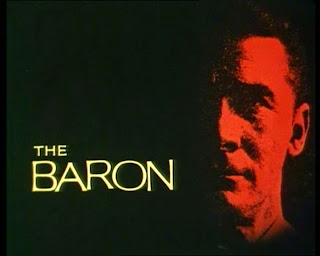 I was becoming worried recently that this blog had far too much Doctor Who, & thus was becoming too much like many another UK TV blog. But, fickle soul that I am, I've made up for that by my more recent rash of ITC viewing, & The Baron is the latest ITC series that I've never seen before but now have a box set of. In my real/unreal television dichotomy, this is aimed more or less at the real side, featuring an antiques dealer gentleman adventurer, actually, in true ITC style, played by an American. It also has a symbiotic relationship with The Saint (explored at length, & contrasts drawn, at http://doubleosection.blogspot.co.uk/2011/11/dvd-review-baron-complete-series.html?m=1).
It's interesting coming to this straight from later shows like Jason King & Hazell, to see how sheerly dated it feels. It was made around the time that Mrs Peel was kicking her way through The Avengers - this reference is also a way in to mention that the street scenes of London therefore look more Avengers upper class, than the gritty council flats of Hazell.
I'm particularly endeared by Mannering's...way with women. Every time he chats up a woman it is so cringemakingly embarrassing by today's standards that it is hilarious. And this can be as simple as telling an airline hostess, who has got rid of an antiques groupie for him, that he would like to show her his gratitude over dinner. She replies, 'Your place or mine?' I mean, this is just unreal! What's also rather unreal, in a less positive way, is his profession as an antiques dealer who is taken on by British intelligence. The first episode shows a ridiculously sophisticated surveillance system in both his home & his shop, which nonetheless fails to prevent a burglary. The gadgetry places this series firmly in the spy-fi genre of the time.
I don't object to Colin Gordon's casting as the archetypal British pin-stripes spymaster, since this role suits him so well. He is the only familiar (to me) face I've identified so far, so it may be that this series isn't plagued by the repetitious casting of some other series.
The show feels to me made with much more of an eye to the American market than here - it looks more like the later series of The Man From UNCLE, than most ITC series. It's interesting, again, to compare it with later series - it moves faster than either Hazell or Jason King, or probably many a British TV series of a good decade later. I'm guessing that this was to conform with American broadcasting of the time, but stand to be corrected.
The plots are - so far - more standard espionage stories of the Cold War era, with none of the bizarreness of some ITC series. It makes a rather porridge & champagne contrast after watching Department S & Jason King recently!
My conclusion so far on The Baron is that several episodes in I haven't found anything to object to, so it must be OK. I like the jet-setting, gadgets, sixties milieu & sophistication elements in particular.
------------------
60s TV The Baron