Allegory in The Prisoner: It's Your Funeral 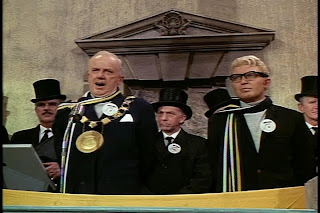 Not a favourite of the fans, this one, although it is one of my own, except when it comes to trying to be creative about the allegory here! I keep trying to get away from the standard allegorical interpretation of The Prisoner, that The Village is an allegory for what is (or was in the 1960s) becoming of our world, particularly trying to escape into my own cherished theory that The Village is both Number 6's own creation & represents his dream of escape from the high-pressure world of his intelligence or espionage job.
This is also one of the Prisoner episodes which have been rather overtaken by technology, & their warning has become more frightening in the process. The activity prognosis on Number 6 represents an omniscient knowledge of all variants in The Village, to the extent that an unexpected variation can be predicted. This was of course decades before the advertisements on the internet were tailored to our individual shopping habits & everywhere we go online can be tracked. For example, the statistics of this blog will tell me how many hits a particular post has had & where the viewers of the blog come from. The US is always top, followed by the Ukraine for some reason (hello, there, do leave a comment if you wish). But I don't doubt that somebody somewhere has the details of which computers have been here, how often at what time. What The Prisoner warned about has actually come to pass.
There is another, probably more postmodern, approach to this episode that also makes it frightening. If you take The Village as either Number 6's creation (going with the theory that he was John Drake & invented a retirement village for dangerous people) or else that it is his dream of escape from his own world, this puts that blame for what happens in The Village fairly & squarely on Number 6's shoulders. This actually also fits well with the resolution that Number 1 is Number 6 himself, since it makes the series completely reflexive & about Number 6 himself. The Village *is* Number 6 & everything that happens there is his doing: a view which leaves Number 6 not looking very good.
This would actually explain Number 6's act of helping a Number 2. It is an internal conflict - whether in his creation or at a deeper level in Number 6's psyche - & after Number 6 is Number 1!
I both hugely agree & violently disagree with Howard Foy's appraisal of this episode:
'If Appreciation Day itself is nonsensical, so too is the assassination plot itself on which the whole structure of the story is based. Why should No.2 be so concerned - as has been suggested - to gain a public excuse to crack down on Village dissidents? Surely if the Village authorities want to be rid of irksome Villagers they can simply be eliminated? As prisoners, they are already as good as dead as far as the outside world is concerned. Even if they are too valuable to be killed off, couldn't they be transferred to a more conventional prison where such dissident activities would not be tolerated? Why hasn't the Village got its own prison where troublemakers could be incarcerated, perhaps in solitary confinement? It seems strange that a Village with all the appearance of a real-life community - shops, newspaper, town council, graveyard - should lack something so glaringly necessary as a police station with a few cells for people who break the "law". The inconsistencies of "It's Your Funeral" can largely be attributed to the fact that writer Cramoy was given either too much licence, or not enough information, when creating his image of the Village. Nevertheless, it is interesting to speculate on where he got the idea for Appreciation Day, the ceremonial transfer of power between Village leaders, and the assassination plot with which it is inextricably linked.' (http://www.theunmutual.co.uk/article4.htm)
I agree enormously, because of course it is nonsensical. On the other hand nonsensical acts are the bread & butter of totalitarian society (for a slightly later parallel, there is footage of a Pioneers' Day ceremony in Rhodesia in the 1970s on Youtube). Once nonsense is presented as sense, it takes a brave Number to be the one to admit it is nonsensical. Allegorically this can be a warning about society or even a psychological failing in Number 6. I also like Foy's parallels between this episode & the kind of ritual killing of kings described by James Frazer.
There is a further layer of meaning in almost a return to the death-rebirth motif of Dance of the Dead, except that here The Village is the source of death rather than life. So it's closer to the 'I am your world' spoken by Number 2 in that episode.
So all in all a multi-layered episode, which may simply lend itself best to the traditional allegorical meaning, but nonetheless is capable of being explored in different ways.
------------------
60s TV Allegory in The Prisoner ITC The Prisoner