Allegory in The Prisoner: Hammer into Anvil 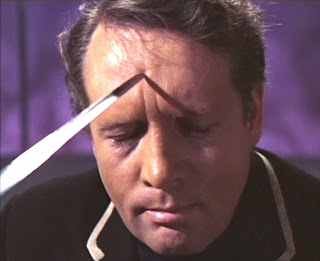 I was wondering how on earth I was going to get a convincing allegorical meaning out of this episode. I was making the mistake of thinking that the plot could be summarised as 'Number 6 sends Number 2 off his head. The End,' & thought that the only allegory I would be able to find was the 'messages' that Number 6 gives to Number 2 - blank paper, false message, cuckoo clock.
Then it struck me that the allegorical point of this episode can be found in what does not happen. Wikipedia characterises this episode as one of the few where Number 6 doesn't make an escape attempt & the authorities don't really try to get any information out of him. I realise that I haven't really been accepting that view & so have missed its significance.
In fact this realisation has made me recall my own pet theory that The Village is allegorical for Number 6's own fantasy escape from his everyday life. His actions in this episode are therefore allegorical for self-sabotaging behaviour, the resistance & sabotage of authority & even possibly 'daddy issues' - or perhaps 'mummy issues' if the successful attempt to get rid of the father figure is seen as akin to an Oedipus complex. Mother in this view would be the Village itself as his fantasy lover. Seen like this this episode is well in the countercultural vein of The Prisoner, & one of the ones with the heaviest, yet so subtle, psychological depth.
Right from the start the issues around sexual relationships & fidelity are reinforced in Number 2's taunting of Number 73 with her husband's supposed infidelity. Her first suicide attempt & subsequent successful one are allegorical of a divided psyche: the fight with father is started when Number 6 tells Number 2 he will pay for Number 73's suicide.
The fight with the roughs abducting Number 6 can be interpreting as defiance of the father figure's authority & position. The mention of sadism & Number 2's threatening of Number 6 with the sword blade develops the existing competitive dynamic while giving it a more kinky edge: from here on, this episode is capable of interpretation in incredibly sado-masochistic terms.
Yet I have some other questions about this that are usually raised for me by the later episodes of Danger Man. Number 2's breaking point - the fact that he will not brook interference or help - is plainly apparent in the scene with the sword. The additional fact that Number 6 breaks him with some very simple techniques to plant doubt - which frankly in a totalitarian regime like The Village should be easily dealt with - indicates that The Village authorities have put in a man who isn't up to the job. It's not really the point in this post that's supposed to focus on allegory, but surely the authorities should have rooted out this Number 2 as vulnerable to the type of simple psychological tricks played on him here.
The other usual allegorical approach to The Prisoner, of course, is that The Village represents society. This episode in that reading shows what one man can do if he puts his mind to upsetting the order of society. I've been tending to avoid this interpretation in this series of posts, since that's the allegory that always appears & I want to think about the series in a new way, but I think that may be the best allegorical approach for this episode.
So in conclusion, an episode that is as usual understandable in several different ways, even possibly as not presenting allegory at all, but which has unfortunately remained obdurate to my attempts to rethink its allegory.
------------------
60s TV Allegory in The Prisoner The Prisoner