Allegory in The Prisoner: A Change of Mind 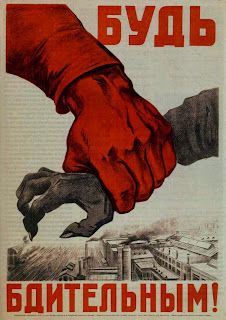 Image credit: http://v4valentine.tripod.com/SPP/MA0102_Index.htm It's a Soviet propaganda poster about fearing enemies of the people.
I was astonished when I came to watch this episode again, to find I not only had no recollection of my blog post about it earlier this year, but I even had the impression it was the episode borrowed from the projected Series 2, where Number 6 becomes someone else in a job outside of the village. I'm intrigued that I focussed on the sheer pretence of everything that happens in the Village (http://culttvblog.blogspot.de/2014/01/the-prisoner-change-of-mind.html?m=1). I had already started this post with the lengthy quote below, not realising that I'd already used a shorter version of it in my previous post:
'A lot of The Prisoner is about the individual versus the collective. This episode was probably the most Orwellian. Prisoners can't just suffer their imprisonment. They cannot be depressed or in any other way unhappy. They must participate with the activities of the collective, smile and be content, socialize with others, and exercise in the Village gymnasium instead of alone in the woods. (This is starting to sound like high school.)
By refusing to be part of the Village community, our hero became "public enemy Number Six". He was shunned by the pod-people-like Villagers who marched about chanting "unmutual" and "disharmonious." He was bombarded with attempts by the "Appeals Subcommittee" to bully him into submission, and bashed with striped umbrellas. And finally, Six was subjected to "instant social conversion."
'The Committee, with their top hats and striped shirts, looked exactly like the Council in "Free For All." For that matter, the Village bullies who attacked Six were wearing the same type of striped shirt, but instead of black pants, they wore blue jeans (so you'd know they were bullies). Bystanders in the Village were wearing khaki pants with *their* striped shirts. Clones everywhere.
'Denunciation, re-education, and re-integration are something that have been with humans for a very long time (see: Inquisition, Spanish), but they took on whole new meaning in the 20th century with the rise of Communist states. This episode very much mirrored the kind of public conformity exercises typical of the Stalinist era show-trials (where one hoped very much merely to be placed in the Gulag for a few years).
'The thing was that "actually existing Communism" (to use the term of art) was defined by a lot of things, but one of the key ones was that it focused on the creation of a radiant future for which people as they are today were completely unsuitable. When Number Six is declared "unmutual," it means he isn't even trying to be suitable for that sort of future. His fellow citizens who confess and conform to both the letter and spirit of the thing aren't any more ready, but they are worthy to keep building it. In Stalin's day, many Russians released from the Gulag (despite incredible hardship, disease, and psychological torment) desperately wanted to rejoin the Communist party and demonstrate that they might still be ready to work for that future. It's this kind of thinking that allows weak people do some very hard and terrible things, and its fingerprints can be found at the sites of horrendous violence throughout the century.' (http://www.douxreviews.com/2012/06/prisoner-change-of-mind.html?m=1 I've missed out chunks of that post to get the bits I want)
One of the things I'm always banging on about in this blog is how different the world was in the time in which most of the series I talk about here, were made. Europe was firmly divided across the middle & it was relatively simple to decide who the 'others' were. I think the Communism reference is therefore the obvious Occam's razor-style reference for the allegory of this episode.
Given that I'd already referenced the above quote but managed to forget about it completely (perhaps 'they' have taken me by night & made me malleable - anyone who knows me in person would laugh hollowly at that) it therefore comes as a shock to me that I've actually already written about the allegory in this episode, although I wasn't focussing on it then in the way it is now. Yes, this episode is allegorical for the perennial subjects of paternalism, social engineering & peer pressure, but the most obvious allegory is of The Village representing a communist state, & functioning as a warning for us in the West of what could happen if our states became like the ones on the other side of the Iron Curtain.
A warning indeed: most of society's institutions are brought into play here. I commented before on the religious (or moral) overtones of this, of the extraction of confessions. The act of telling the Villagers what to confess & therefore how they have 'sinned' would reference for McGoohan the 'educated conscience' talked about in Scholastic Catholic theology. I talked also before about how The Village functions like a cult - in fact in my personal opinion the majority of even respectable mainstream religions can & do function like cults. The obvious example would be the obsessive secrecy with which Catholic clergy have cheerfully covered up the criminal acts of other clergy.
Nor is psychiatry neglected & this episode functions (in the heady anti-psychiatry milieu of the 1960s) as a terrible warning of what happens when medical psychiatry becomes a tool of social control. The council warns about Government & the way the rules of mutualism are applied warns about the Law.
A relatively simple allegory here, but nonetheless making this one of the more countercultural episodes.
------------------
60s TV Allegory in The Prisoner ITC The Prisoner