Sherlock Holmes: The Hound of The Baskervilles 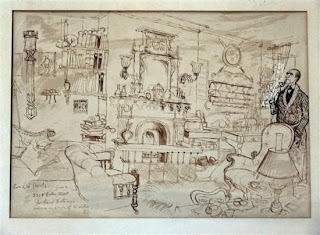 Image: a drawing by Ronald Searle of Holmes's rooms at the Festival of Britain. Credit: here.)
This post is about the 1968 BBC series, rather than the earlier Hammer film with Cushing as Holmes. Oh dear, within a space of about a month Peter Cushing has become 'my' Doctor Who, & he has now completely usurped Basil Rathbone as 'my' Sherlock Holmes. No pressure there, then. Nor yet the slightest hint of a monopoly. I didn't actually know he'd played Holmes until I found the boxed set in a charity shop today.
I have a personal history with Holmes. I read the Conan Doyle stories when I was very young - certainly before the age of ten. At the time I thought him wonderful & would model myself on him. The one guaranteed way to get me to do something then would be to tell me Sherlock Holmes would do it. As I've got older my native cynicism has caused Holmes's repute to be overshadowed in my estimation by a more grown-up & certainly contemporary estimation of what he is about. It may just be my twisted mind but I cannot but see a sado-masochistic sexual dynamic between Holmes & Watson. In the Conan Doyle books, Holmes is so incredibly rude to Watson that most people would hit him or move out from their 'rooms'. The fact Watson - a doctor & therefore a man with at least two degrees who must therefore be intelligent in his own right - does not do these things forces me to the conclusion that he enjoys, or at the least doesn't mind, being continually humiliated. Naturally be seeing a sexual dynamic - not necessarily a sexual dynamic - here I am reading it in an essentially post-Freudian way, which wouldn't have been available to Conan Doyle unless he was up on the very latest psychological theories. I can't really see this as a problem - we live in a highly sexualised age, & to ignore the age's effect on us is to invite trouble. Suffice to say, I acknowledge that the sexual tension I see there is very unlikely to have been intended in the original. This is of a piece with the attempts to prove that he was gay - of course he wasn't, people didn't think about sexuality in that way then.
It is therefore a relief to me to find that sexual dynamic completely absent from this adaptation, the only Holmes adaptation I perceive it missing. Cushing's Holmes is a much more...academic character. What I mean by that is that I can see this Holmes as an Oxford don or a man of letters with private means. I don't wish to imply that Cushing's Holmes is lacking anything, but the intelligence & cold rationality strike you before the instability, drug use, ennui, & dodgy friends, that are often the overriding impression of Holmes. Of course there is the ghost of a criticism of his portrayal here: he is a respectable Holmes, rather than the demi-mondaine character of the books. I do like Nigel Stock's Watson - he isn't half as bumbling as he is usually portrayed, & he comes into his own in the second part by showing he has actually learned from Holmes, rather than just being the stooge. In fact, on re-reading this I'm quite surprised to see that what makes this for me is a radical alteration of the two lead characters & their relationship, at least as perceived by me!
The respectability of Holmes may of course be because this is respectable BBC territory, rather than low-brow ITV, and indeed this production is very much of its time, with the feel of a very worthy television play. For me the pace is just right for Hound of the Baskervilles, which is a novel rather than a short story, & which I remember being composed of many scenes with apparently insignificant detail: an impression accurately reproduced in this piece.
I have two criticisms of the sets & music: I personally found the interiors to be overly colourless, giving a completely grey appearance, even outside of the stone of Baskerville Hall. In succeeding episodes of the season I've got the impression that Holmes's room is more coloured - to me the Sherlock Holmes museum in Baker Street has become the norm by which other portrayals are measured! Also the - presumably - stock music used is too short for the titles (& elsewhere) & is rather obviously repeated, on a DVD giving the impression there is something wrong with the disc. The music used in the second part perfectly sets the Wuthering Heights-esque atmosphere of fear on the moor. If I really wanted to nitpick, I would also comment that Dr Mortimer's hair is too long for Victoria's reign - it would have given an impression of effeminacy rather than respectability.
My conclusion is that I like this portrayal of Holmes & Watson so far. The second half of this one is better than the first, it feels more sure-footed & draws the viewer in better. I'm looking forward to watching the rest of the series.
------------------
60s TV BBC vs ITV Peter Cushing Sherlock Holmes