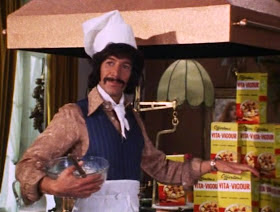 Apologies for the recent hiatus on posts here: I have been, & remain, unwell, so have not been able to get my head round my usual acid interpretation of a defenceless TV programme. My recent watching of Department S, & conclusion that it had hidden depths, left me wanting more, so today I bought the box set of Jason King, its follow-on. In vain will you seek my first impressions of the series on this blog: they happened some time ago with an odd disc & I was not impressed, but I thought I'd give it another go.
'The series featured the further adventures of the title character who had first appeared in Department S (1969). In that series he was a dilettante dandy and author working as part of a team of investigators. In Jason King he had left that service and was concentrating on writing adventure novels following the adventures of the fictional Mark Caine, [which the Jason King character was also writing about in Department S] who closely resembled Jason King in looks, manner, style, and personality. None of the other regular characters from Department S appeared in this series.
'In the course of visiting international locations as part of his research, or through being summoned by people needing assistance, King would be frequently embroiled in adventure stories featuring glamorous women, exotic locations (for the era), menacing villains, political turmoil, or espionage intrigue.' (http://en.m.wikipedia.org/wiki/Jason_King_(TV_series) - the Wikipedia page also recounts the surprising cultural legacy that this relatively recherche TV series has left)
In fact, reading about Jason King has made me gain an even greater respect for Department S, since Jason King carries on the identification of King with his fictional creation, to the extent that it isn't always clear who is who:
'The show is cleverly postmodern, both in its allusions to other novels and films and in its self-referentiality. King, the author of Mark Caine novels, is often confused with his fictional creation: this is an ongoing aspect of the series. In the episode entitled 'Nadine', Nadine tells King that 'You change, Mark Caine has completely taken over […] The fantasy world becomes more real than the real one'; King's response is to assert that 'It's only because the real world is much more improbable, much more like fiction'. Likewise, in 'Flamingoes Only Fly on Tuesdays' the character of Pelli (Hugh McDermott) asserts that 'The worlds of Marc Caine and Jason King are extremely close together. I think you would run guns just to get the feel of them'. This aspect of the character of Jason King is usually taken as a direct nod towards Ian Fleming (see Chapman, 2002: 192), who some biographers tell us shared a similarly ambiguous relationship with his chief fictional creation, the character of James Bond (see Pearson, 2003; Cabell, 2008; MacIntyre, 2008).' (http://www.dvdcompare.net/review.php?rid=541 - this review also talks about the particular spy films parodied in Jason King: I'm probably not familiar enough with the spy genre myself to avoid missing references)
My impression is that you either love Jason King or you definitely don't. You think the man himself is worth the show - I have even read a review that says his moustache alone makes the show worth watching - or he'll irritate the hell out of you. You either think the flamboyant King needed the foil of the normal people in Department S & is too much on his own, or you don't. You either think this is wonderful seventies nostalgia TV (well, this isn't that bad a reason for watching a TV series), or you think it a waste of the 16mm film it was filmed on for economy.
My own second thoughts are more positive than my first - I really didn't take to this show the first time I saw it. So, perhaps it's best to address the common objections in order. Jason King is a very seventies-bound series: there is simply no escaping this, & if you find the taste of the 1970s nauseating, you will not like this show. Seventies style takes me back effortlessly to my childhood so I personally don't have a problem with that. What many people will find more difficult is King's attitude to women, again very much of its time. The series feels to me most like The Saint - perhaps in terms of exotic locales, luxury hotels & expensive cars. Jason King is definitely one of the series that would have been escapist viewing for a working-class populace.
Finally, it seems to me that Jason King has found his milieu in this show. I disagree with the criticism that he needs the foil of normal people in Department S: I feel that background made him stand out as more odd, but in Jason King, the fact that everything is camped up a bit makes him appear more normal.
Production values are of the time, of course. I don't object to the 16mm film, but the stock footage is rather obviously showing its age over the studio footage. If you're looking for detective plots this is probably not the show - it is plainly intended as a vehicle for Jason King himself.
So all in all, a pleasant surprise to come back to Jason King & find I like it more than I thought!
------------------
70s TV Jason King Petunia Winegum