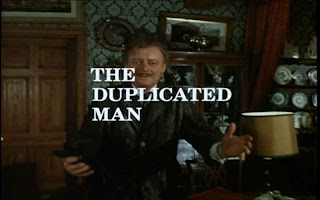 (I will return to The Prisoner soon: I just need time to get my head round allegory in Dance of the Dead!)
Classic Avengers territory, here, as far as questions of identity, doubles, deception, & state secrets are concerned. Watching Department S this time has really made me re-evaluate it as a successor to The Avengers, in a rather Series 6 mould, in terms of bizarreness, eccentric, flamboyant characters, & an organisation behind the characters' odd lives.
Of course I have my usual gripe that the actors' faces are too familiar from sixties TV & have a tendency to make you wonder where else you've seen them - Basil Dignam & Robert Urquhart would be the ones that do that to me here. I'm intrigued by the impressive use of Steed's library - the books that appear in Stable Mews - that I can spot in no fewer than three locations in this episode. I don't always disapprove of repetition!
Of course this is a piece where momentous matters of state are covered in a rather frothy confection. It reminds me actually of the sort of questions of security raised by Danger Man - the security checks on Anthony Harvey clearly didn't exist or failed miserably to ensure his reliability here. He is described as one of the best agents of MI5 - but he not only planned a complete disappearance, but was ill-advised enough not to cover up his tracks enough. MI5 is clearly asleep on its laurels there. The other thing is it does not escape Department S that it is possible that the accident has been arranged as a test of security, in which case the pilot has been 'sacrificed'. Heavy stuff, indeed, & also the sort of stuff calling into question the integrity of our security services.
Further Avengers features are the mother, the home the mother is in, the silver snuff box, the fact the baddies are so stereotypically Cold War-era baddies, & the Tara King hair & car sported by Rosemary Nicols. A further similarity is that at one point Peter Wyngarde speaks American English when he says 'don't wait dinner' (that is American, isn't it? I'm sure it's only intransitive in British English) - a suggestion that this show was being made with an eye to the American market, just as the later Avengers were.
Of course it's a question of classic spying, double-dealing, & of course it all ends in tears. This is perhaps the most Avengers-esque part of it: going over to the other side will come to no good. *But* the double-dealing extends to the heights of MI5 - a more nuanced spin than The Avengers would ever have put on this plot. In fact the final message is quite nihilistic - there's no point to sticking to either side ultimately; they'll both have it in for you.
I wouldn't want you to think that my comparison of this episode to The Avengers is derogatory in any way: it's an excellent show, with real suspense, & perhaps a worthy descendant of The Avengers.
------------------
60s jobbing actors 60s TV Department S Petunia Winegum Steed's Library