Allegory in The Prisoner: Checkmate 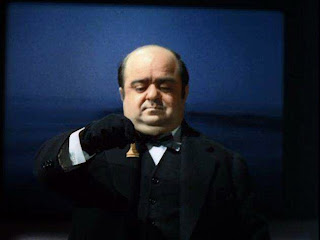 It's interesting, watching this Prisoner straight after Department S's Black Out, where I commented on the dodgy use of medicine in that show. It isn't actually half as dodgy as the use of medicine here. On the one hand, people are over-medicalised, & of course it's anything like nonconformity that is marked down as a disease. On the other hand the 'treatment' is clothed in a facade of kindness.
Also similarly to the last episode of Department S, when placed into its historical context in the heady 1960s, this episode becomes a terrible warning of the way in which society was perceived to be going. The chess game is a rather obvious allegory for the way society pushes people into ordered positions, & the Village is an allegory of how this is inescapable. Power, control, the use of emotion, the misuse of medicine & psychiatry are all servants to the theme here: society's control is inescapable.
I must confess to yet another Prisoner heresy here: I feel that in allegorical terms this episode almost completely defeats its own object. It does this by the excellent visual of the chess game, which is almost certainly the one thing everybody 'remembers' of the series, which unfortunately makes everything else pale into relative insignificance. The other aspects of the allegory here are really the servants to the main point, but things such as the contemporary wariness of technology can tend to go unnoticed. The fact that the Village masquerades as a holiday camp, with Number 2 asking people how they are on the beach, could reference a projected future world of no work, where all the jobs have been given to computers, leaving the humans ever more at the mercy of the all-controlling State. The recurring Prisoner theme of them-&-us/black-&-white is also used, all examples of what could happen if society gains the sort of control over us depicted in The Prisoner.
Finally there is an interesting element of what could be interpreted as magical thinking here: as Number 6 is returned to The Village, The Butler places a pawn back on a chess board. The implication is almost that that chess board is actually how the captives of The Village are manoeuvred! (It's reawakened my wish to write a Prisoner post (I doubt it would be more than one) on the subject of The Butler Did It In The Prisoner!) It's almost as if there is a sense in which everything else is subordinate to the chess game - despite having a number, the rook is referred to as the rook throughout the episode, & the 'players' in the piece are intentionally turned against each other, just with the variant that it's deliberately unclear who is on which side.
From a non-allegorical point of view, Peter Wyngarde, in a relatively subdued role for him, still makes a somewhat flamboyant Number 2 (is that mascara I see?). His...languid tones in the opening dialogue interestingly make Number 6 sound rather petulant & childish by contrast - the firmer tones of most Number 2s don't have this effect to my ear.
One niggle is that the voice commanding the rook in the water dispenser behaviour modification, is very clearly that of Patrick McGoohan! Another is the use of familiar face Ronald Radd as the rook.
So to sum up - clearly an intentionally allegorical episode of The Prisoner, unfortunately marred by the fact that the allegory is so obvious, almost laboured, & depicted so effectively, that all the subtexts of the episode can go unnoticed.
------------------
60s jobbing actors 60s TV Allegory in The Prisoner ITC Petunia Winegum The Prisoner