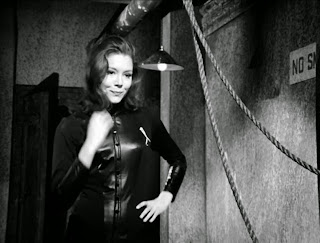 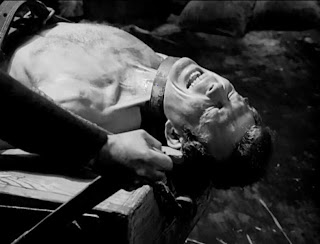 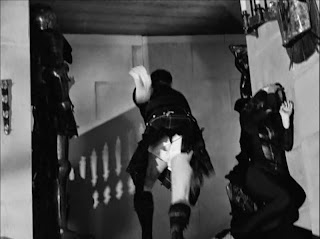 This Avengers episode is one I've rather avoided blogging about for reasons which will become apparent as we go one (actually they should be fairly obvious from the pictures). This Avengers is an interesting one - despite the sheer 'Britishness' of the show (the inverted commas are for what I perceive as its caricature of Britishness, which I believe increased - presumably for the American market - as the series wore on) The Avengers frequently shows the old landed families & the great & the good of Great Britain, as going to the dogs very quickly. In this the decayed De'Aths are contrasted with Mrs Peel, racing in as the representative of Modernity, to bring their traditional privacy to an end. In this, as so often, The Avengers is poised on a knife-edge between two ages: itself a completely time-bound idea. Fifty years after this show was made, the modernity that was trumpeted as the future has fallen into almost complete disfavour.
Normally I dislike seeing actors familiar from other shows: despite the conflict with his in-character brother, it is interesting, though, to see Gordon Jackson playing a somewhat less acerbic character than he does in The Professionals! I still think it a mistake to have two others actors who have played other characters in other Avengers episodes - Robert Urquhart & Russel Waters. I don't really otherwise have anything critical to add to the horde of reviews online, to which mine is the same: excellent scenery, dire plot, saved by great atmosphere. This is definitely an Avengers you watch for the atmosphere (whatever you're looking for) rather than the plot.
One other thing just has to be said about this episode: it is incredibly sexy. A Touch of Brimstone is the episode from this series that is perhaps more overtly sexy, but this one manages to include so many things that could be fetishes, I can only imagine they were included to up the kinkiness level, while pulling the wool over the eyes of the - presumably - straight-laced censor. The list could include, although I'm sure I've missed some: man on the rack at the beginning; men in kilts (incidentally I laughed out loud once on a bus when I read in Patrick McNee's autobiography of how his mother's lesbian lover used to tie his hair in a pig-tail, dress him in a kilt, & say, 'We'll make a girl of you yet!'); the very presence of Mrs Peel (well, why not?); a cellar full of torture equipment; a man being easily beaten up by Mrs Peel; frogman outfits (I made the mistake of googling this one); Mrs Peel being locked in the cellar; the collapsing four-poster bed (I'm thinking asphyxiation rather than being crushed, but you never know); asphyxiation fantasies around breathing equipment; Steed tied up, arms akimbo; the scene of Mrs Peel on the stairs in her transparent nightie leaves little to the imagination; and the accidental glimpse of white underpants as Angus De'Ath runs up the stairs would probably be all the more interesting for being accidental, if you like that sort of thing.
Incidentally I cannot believe that this episode was uninfluenced by the Will Hay film, The Ghost of St Michael's:
'An ineffectual science teacher William Lamb (Will Hay) is hired by a school recently transferred because of World War II to the remote Dunbain Castle on the Isle of Skye, Scotland. Posing as (amongst many other things) an Old Etonian, Lamb settles down into his new surroundings and becomes acquainted with the various local Scottish traditions and legends that abound and strikes up a friendship with one of the other masters, Hilary Teasdale (Claude Hulbert).
'However, shortly after his arrival an ancient curse returns to Dunbain Castle. The sound of bagpipes signals the death of a member of staff. Two die and Lamb is initially regarded as a suspect. With his friend appointed as the new headmaster (and the next potential victim), Lamb must solve the mystery of the mysterious murders with the assistance of mischievous know-all schoolboy Percy Thorne (Charles Hawtrey). A Nazi spy ring proves to be behind the killings, and is defeated by a British agent hidden amongst the staff.
'In one of the more memorable scenes Lamb is trapped inside a secret room with the ceiling slowly descending upon him.
'At the very end of the film Hay can be heard calling the Character Teasdale "Claude" the actor's real name. This may have been intentional as Hay had just told the cinema audience that it was "all clear" and that they could all go home. Note that Charles Hawtrey was 26 years old when he portrayed Percy Thorne.' (http://en.m.wikipedia.org/wiki/The_Ghost_of_St._Michael's)
------------------
60s jobbing actors 60s TV The Avengers