Doctor Who: Doctor Who & the Daleks 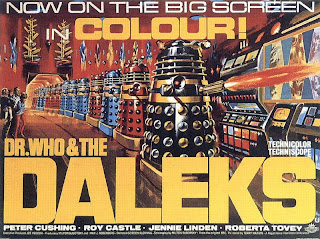 The film, that is, the critically-slated & never-mentioned film starring Peter Cushing as The Doctor. I've already blogged about the TV version of this show (http://culttvblog.blogspot.com/2014/01/doctor-who-daleks.html?m=0) & on re-reading that post am delighted to find I liked it more than I thought I did.
One of the things I notice about my Doctor Who posts is I don't seem to be able to get into the sort of relentless grinding detail in which Doctor Who is often discussed on the internet. I'm not sure why, I'll probably come to a reason at some point. But for the moment imy main feelings about this film both flies in the face of the fans' & critical opinion & is also very short: I think this film version is *better* than the TV version. <Ducks to avoid the cabbages thrown from the wings>.
I found myself repeatedly thinking as I watched it, 'This is the filmic treatment that Doctor Who really needs.' Don't get me wrong - I'm not making this out to be some epic, but I think it points out something lacking in the TV series. The kind of stories told in the TV series should be made as films. They would be so much *more* frightening on the big screen. They need music. In a cinema the audience would feel inside the action in a way you don't with the telly.
And what a film it is, it has the sixties heady vibe of the Charlie & the Chocolate Factory film of 1971, I think because of the colours. We who grew up in the seventies remember them as a magical time of bright colours: & so they were, but only because we were off our heads on the additives in the food. In the 2010s they have to turn to crystal meth for their high, can you believe it!
The colours used are actually very clever: the scenes outside the city are in greys & browns. Inside the city the shades are - well, I'm not an artist but I can only describe them as soft pastels. This provides a contrast with the relatively bright colours of the daleks themselves, although I did like a baby blue one. It's when we come to the daleks that my theory that film would be better than TV here, wobbles a bit. The famous scene where they turn round, find themselves surrounded, & the daleks appears on the TV screen for the first time ever appears in both film & TV. Of course it would be truly terrifying in a cinema (probably only if you hadn't seen the TV version already). However watching that scene on TV would give it the feel of a documentary: & the subtle implications of that could provide nightmares for weeks!
I wouldn't go to the stake for this idea - I've just realised the reason I'm sying this is that I think we are more accustomed to the idea of the images we see nowadays, being unreal somehow. Even if they're not CGI, they'll be photoshopped within an inch of their lives. The panic caused by The War of the Worlds ought, surely, not to happen nowadays. I was at work on 9/11 & saw as I passed a TV several times, the footage of the towers & I really thought it was a film, & not the actual news. But I digress.
To return to the somewhat psychedelic colour palette it has also been applied to the Thals. Their costumes are still ridiculous, neither here nor there, but their hair is wonderfully artificial-looking, & all the men have a fringe that's ridiculously high. A sad contrast to the poor daleks, who at least maintain some dignity, being encased in their enclosure thingies. That's right - once again I feel sorry for the daleks & the Thals elicit no sympathy at all.
I hadn't realised some elements of Doctor Who's character in this. Time Lord goes to a faraway planet, hoodwinks his companions into staying on the toxic planet for his own curiosity's sake, teaches the peace-loving natives to fight, sorts out the situation for them, goes home. Not the slightest hint of imperialism there. This is exactly the same plot as the TV version referenced above, but hit me differently. This may be because it's Peter Cushing playing the Doctor & I expect him to be creepy & sinister. I love Cushing's doctor portrayal: from now on when people ask my favourite Doctor, I'll say him. It's actually a fairly low-key role, but Cushing does a good job of being kindly old man yet leader of the people at the same time. Roy Castle manages not to annoy me - I remember him as an intensely irritating person, but a straight acting role seems to stop that effect on me.
Don't get me wrong - this film isn't without faults. Perhaps the most glaring is the attempt to make it funny. Whatever else Doctor Who is, it doesn't suit the Carry On elements that have been inserted here. Ignore them, is my advice, watch it as a longer, more epic, Doctor Who episode, & you won't be disappointed.
------------------
60s TV Doctor Who Peter Cushing