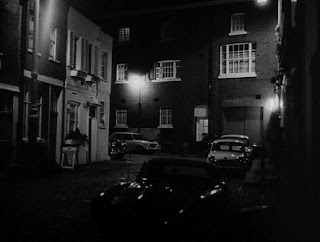 This post is having the greatest difficulty seeing the light of day: I would like to blame it on an IT problem, but in reality it's been a me being silly with IT problem. At this point we are approaching halfway through the region 2 box set of longer Danger Man episodes, & I feel this is where the series really gets into its stride. Despite the years it's already been going on, I feel Drake or McGoohan develops a new reassurance in the role, the storiess have a new reassurance: it's as if everything is just falling into place.
It's strange, since on the surface this one starts like an episode I wouldn't like of sixties drama: all manana & revolution in Latin America. However straight after the titles it gets into its stride as a Britain-based story of high society corruption. Yet I feel that doesn't begin to describe this episode: it is literally polished on all levels, plot & subplots work together in an engineered way, characterisation is excellent, the dialogue sparkles maturely like a vintage champagne. Unusually for me, I literally can't sing the praises of this episode highly enough.
Characters, for instance. Whether it is realistic for mid-sixties high society, of course I can't say, but it gives an impression of brilliant, yet brittle, characters, which does nothing to jar at all. The two women who clearly hate each other, for example. It could so easily go wrong to have such brittle conversation in the midst of what is really a quite intense spy drama, but it doesn't. There is literally not a foot set wrong here, & they perfectly manage to be part of a colourful cast. The George Foster of the title manages to be incredibly frightening.
You see at base this episode is not about bigamy or corruption: it's about power & fear. Drake has at heart the interests of a place called Santo Marco. He has against him a powerful bigamist, pretending to be someone he isn't. 'I can ruin you,' he tells Drake: his threats & offers of bribes - 'I hope we can be good friends,' he says after threatening to ruin Drake in every way - are cleverly interspersed with domestic appearances from the woman who believes herself to be his wife. This cleverly underscores what 'Lord Amerford' has at stake, & how he has established his life on a lie.
You don't quite feel sorry for him, since the script is perfectly arranged to show him up for the monster he is. This show manages some serious terror: it is literally a case of Drake being up against any number of dangerous men, having a simple truth to tell, which the establishment is predisposed not to believe, since George Foster has oiled the wheels so that it is in powerful people's interests to support him, rather than Drake. The pressure on Drake is immense. Once again the episode has a scene in his own mews house - he has literally no privacy & is in danger of his life. He is beaten up once, a passenger in his car crashes it, framed with stolen goods - this is an episode where the odds are really stacked against him. It's lucky we know he's the goodie, or we could think that beating up a policeman & stealing a police car could make him an ambivalent character. He's rather more in the desperate hero category, to my mind.
The ambivalent character is actually Foster's legal wife, who is quite content to know that he is a bigamist, & as long as he does 'his duty' to her refuses to see that as a payoff. He even tries to bribe Drake. To his credit he doesn't really try to look for sympathy, but believes himself to be untouchable. It is at the moment of showdown with Drake that Foster's *other* wife does one of her domestic intrusions, to measure a sleeve on him, which underscores the impact the story of Foster's bigamy coming out, would have on her. Drake rightly has created some insurance before he gives Foster an ultimatum. He also makes it plain that it is for the benefit of the little man in San Marco, not for the pleasure of having won. It does come out that the threat underlying his ultimatum was a bluff - that's the only bit I don't like: it would have been better left as it was.
Yet despite being virtually single-handed he can rely on his contacts in Fleet Street, almost alone. So there is an element of this show that is about the little man against the big man, & how working together works against insuperable odds. It's actually a bit trade uniony!
Highlights of the sparkling dialogue:
'I'm too rich to have problems, I only have attitudes.'
'He seems a nice young man.'
'Yes - what a pity.'
'What a dear little house.'
Mirrored by the later,
'What a dear little room.'
------------------