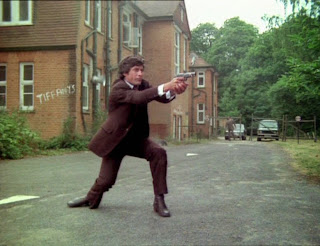 The New Avengers seems to divide the fans, & I'd hate anyone to think that since I've only posted here on - I think - one episode, I'm not keen myself. I used to think that The New Avengers was best watched as a standard seventies detective series - very much like The Professionals - without reference to the original Avengers series. I have revised this opinion on re-watching the series a few times. Just for one example, ho Avengers is it to have a neo-Nazi gang disguised as monks kidnapping a doctor played by Peter Cushing to revivify their frozen leader, who is never named? Or another episode where an army of schoolgirls beat the baddies into submission? It is very difficult, seen like this, to see The New Avengers as anything other than the direct descendant of The Avengers.
And I think Target is probably the episode that most makes me think of The Avengers, visually. It is very difficult to fail, using a disused hospital as a set, turned into an agents' training ground in this case. The location has the feel for me of the deserted airfield in The Hour That Never Was - in reality the setting is presumably empty, it certainly looks derelict, the difference being that that is not the whole point here as it is in The Hour That Never Was. I would have to disagree with Alex Wilcock's view that the point here is that it is a normal street that shoots back (http://loveandliberty.blogspot.com/2008/12/target.html): the setting is plainly not a normal street. I take his point about parallels with the opening scenes of The Avengers film - although there it has always seemed to me that the point is that it is plainly a normal village street, but it turns out to be a mock-up. I suppose a meta-view would suggest that in the Avengers 'family' of shows there are different layers of unreality going on: sometimes things are what they seem but are not being used the way they are expected to be, or else they are being used as something different from their original purpose but twisted by the baddies, or else they are visibly what they seem to be but turn out not to be. This would also apply in the case of Murdersville, where nearly the whole population of the village, despite its chocolate box appearance, has gone to the bad.
In this case the 'street' is clearly only intended to be a mock-up in some disused buildings (actually the location was Pinewood Sanatorium, see http://www.workhouses.org.uk/MAB-Pinewood/). The point here is again a firmly Avengers one, of corruption inside the organisation. The solution to it is also a firmly Avengers one, the (relatively) maverick Steed solving the problem. It is a great pity that the plot is so full of holes it simply isn't true - the tropical poisons bit is another Avengers reference. I think it is for this reason as much as any other I've have to revise my opinion of The New Avengers - this episode would be a perfect example of it being pointless to watch this one for the vacuous plot, you have to watch it for the characters, atmosphere & visuals.
And how Avengers is it in those aspects! Purdey is the most like Mrs Peel I've seen her in this one - not so overly sexy as she can sometimes be in the later New Avengers episodes. I love the bit where she does the assault course without her (kinky) boots, & dressed about as ridiculously as she could be for the occasion! These earlier New Avengers were replete with symbols of Britishness such as phone boxes, even the titles were different. Much is made of a police box being blown up in this episode - it was the actual model used a decade before for the two Doctor Who films (http://theavengers.tv/forever/newave-6.htm).
Just for the record, it is unfortunate that the holes in the plot are all related to the whole point of the plot - the varying way the poison works being the obvious one, the changing speed it works, the unnecessary touch of having the antidote hidden in Steed's hat, etc. What I love about this episode is related to the setting - it is such a good touch to have mannequins of Steed & Purdey amongst the enemies in the street mock-up. I love that the graffiti includes a reference to Purdey & the way the signs added to the old hospital both come in German & include references to Steed.
This episode is sometimes criticised - a criticism that is often extended to the whole of the New Avengers - for treating Purdey as (almost) purely ornamental. I genuinely don't get that impression from this episode, rather, what I do find a bit much is the way she is obliged to show as much leg as possible on every opportunity. She is clearly 'objectified' in a way that I feel a similar character in a similar show would not be nowadays.
My favourite bit (after much consideration) is when the archivist says, 'If you want to keep looking at files, you should get a set of your own.'
------------------
70s TV The New Avengers