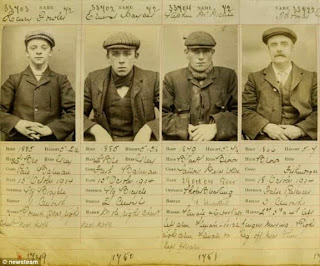 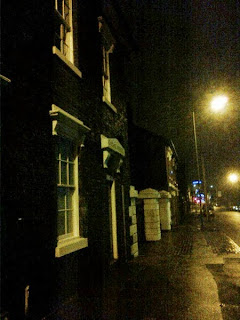 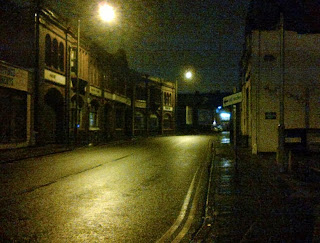 I don't think I've properly defined the word 'cult' in the title of this blog - of course it really means 'whatever takes my fancy'. Recently Peaky Blinders has taken my fancy, although normally I don't do period dramas - as a complete pedant I'm always looking for faults. I so wanted to like this show, really I did, I've so tried to like it.
Let's get the good bit out of the way before I tell you the - totally subjective - reason I can't watch this show. It is a meticulously researched, largely historically accurate rendering, based on a real gang that terrorised Birmingham from the last decades of the nineteenth century to the first decades of the twentieth. These were real people - the first picture is a picture of real peaky blinders, released by West Midlands Police.
The series has spawned an incredible cult locally - there are peaky blinders & tours going on like nobody's business. It has also been heavily criticised in equal measure. One is that it was not filmed in Birmingham - I don't have an issue with that, personally, I think the locations in Liverpool are just right for the old Birmingham feel. The reason they gave that there isn't enough of the old Birmingham left, is just wrong. The last two pictures are ones I took in the actual area round Park Street & Fazeley Street that was part of the gang's patch.
But there is one thing terribly wrong. I commented, when writing about Public Eye, that actors never seem to get the Birmingham accent right, at least to the ears of a local. Peaky Blinders has been criticised for using present day Birmingham accents for the 1920s, I have read interviews with the actors who are very proud of having listened to people talking in pubs here, & even to Ozzy Osbourne! I'm sorry, none of this will do. First impressions were very good - in the pub scene, the hubbub is definitely strong Birmingham. But there is an inconsistency with the accent among the characters & even in certain characters it keeps slipping into...a Liverpool accent. No this is just plain wrong. The Irish accents would have been an authentic presence in the city but Birmingham accents don't slip into Liverpool.
I think it's reminded me of why I don't do period dramas - it's just wrong. These characters were supposed to be poor. Poor. Really poor. Involved in crime. Desperate. The actors look too healthy & well fed for this - I'm reminded of how Tom Hardy lost two stone to play Stuart, & did it very convincingly. In any big city, even in the 'developed' world, today, the poor people look poor, criminals look shifty, the druggies look like, well, like they're on drugs. Even smoking, the scourge of the lower socio-economic classes, makes you thin & haggard. They don't look like the constant recipients of five portions of fruit & veg a day.
I haven't completely given up on it, but at this instant I have Kojak on, which I'm watching with much more interest, because it's not trying to be anything it isn't.
------------------
60s TV Peaky Blinders