Danger Man: Don't Nail Him Yet 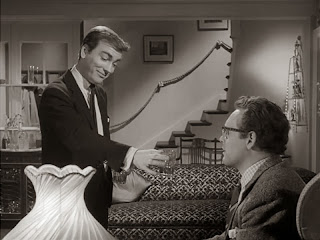 I like this episode a lot, for its scenes & for the inside scoop on what Drake's life as an agent is actually like.
Rationally, I know that the lives of secret agents must involve a high degree of acting. Stanislavski has nothing on agents' needs to think themselves into a role, & that is what we see Drake doing here. I find this strange connection between the worlds & espionage & the theatre, fascinating. Yet how much more difficult for a spy to maintain a role, often alone, & in circumstances far more threatening than those where the only opposition consists of the public & the critics.
The circumstances that give rise to suspicion of Rawson are oddly exactly the same as the question I raised about Drake himself in my last post: the relative opulence of Drake's lifestyle would probably be more easily explained in reality by a lush salary, & presumably covered by some cover story. Rawson's cover story - that he has friends in antiques - is much more flimsy. To buy or rent that mews house even at the beginning of the 1960s would certainly not be cheap - they are in some of the plushest areas of London. For me the whole point of this episode is the way in which Drake enters Rawson's world, almost reflexively shaping himself to enter, yet the apparent parallels in Drake's own life remain unmentioned.
Drake is very clearly in conflict with the powers that be in this episode, not only with his own boss but a government minister. Yet he is clearly on 'our' side here - & this episode is an overtly Cold War episode once we find out what's happening - so Drake clearly believes in the cause.
This episode features a host of familiar acting faces, both of the sixties & later, including Wendy Richards as a hooligan, but not distractingly so. The actors remain their characters for me, & don't overly attract attention to themselves. Of these, probably the most colourful character off-screen is John Fraser, who plays Rawson. He discreetly lived a gay life at the time it was illegal, avoided the lure of the casting couch, thus never managing to sleep his way to the top, & has now published his memoirs of so many stars he knew.
I have read criticism of this Danger Man (there's a crit saying this on imdb, for example) that it starts off well then moves very slowly & is overly talky. I don't object to that myself - the relatively fast introduction gives the impression of being intended to allow time for the slow relentless game of cat & mouse, exactly as Drake intends it to be, of which the rest of the episode consists. So I see the pacing as fully intended, & not a fault. Drake, of course, gets to show his mettle in the abrupt ending, which again feels to me intended to provide as much space in the middle as possible. If you don't take the pacing as a fault, I'd actually have difficulty finding fault with this Danger Man myself. Well plotted, timed, genuinely suspenseful. An excellent Danger Man episode.
------------------
60s TV Danger Man