The Avengers: School for Traitors (Venus Smith was an Avengers Girl) 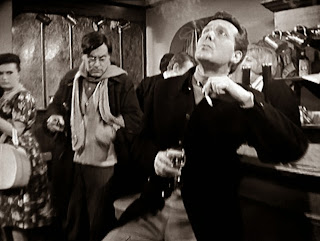 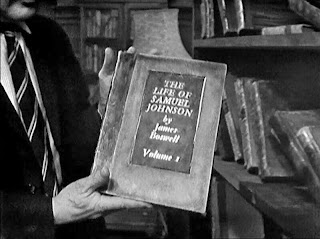 The opening scene of this Venus Smith episode may perhaps encapsulate what is wrong with all of them: I wasn't around in universities in the early sixties, but whatever the students were dancing to, I'm damn sure it wasn't the Varsity Drag. The song comes from a 1927 musical called Good News, & since this would be associated with their parents' generation, it would have been terribly demode. I don't get this total feeling of wrongness with the other songs used in the Venus Smith episodes: even if they are old songs they're suitable to their nightclub milieu.
The wrongness extends to everything else in this episode: the plot is outlandish, the characters unsympathetic, it simply fails to maintain interest. The university setting falls flat on its face - to me it feels like the idea of a university of someone who hadn't been one. Since James Mitchell, the writer, had been to Oxford, this idea is just plain wrong, but nonetheless it remains for me an Oxbridge man's idea of a provincial university, clearly based in sets trying to be an Oxbridge college. There's all the tweedy, pipe-smoking old school clubbishness of Oxbridge, but yet with town mixing too much with gown. This episode compares poorly with the Emma Peel episode A Sense of History, set in the fictional university of St Bode's. I think with the creeping unreality that set in with the Emma Peel series, the production could get away with creating a university with minimal personnel & sets: the whole point of St Bode's is that it isn't real, & so the unreal antics that go on in it are excusable & indeed to be expected. Here the unreality of the setting makes the story unreal, & that is definitely not what was being aimed for. The university setting does provide an opportunity (the earliest I've spotted so far) for the books which later formed Steed's library in Stable Mews to make an appearance.
To attempt to drag myself back to the point of this series of posts - Venus appears fully-formed as Venus in this one, the first time we see the Venus we love or are irritated by. She finally appears with hair & clothes that suit Julie Stevens & contribute to Venus's personality. Perhaps this is also the episode so far where she acts most like an Avengers girl, remaining a sidekick to Steed, but then her business is music not undercover work. Although she must like it - by now she really ought to be sharply on the lookout for any gigs Steed arranges for her & run quickly in the opposite direction if she sees him. In this one she addresses him as 'love': I maintain that despite her apparent naivety there is a sexual tension to their relationships.
Morally, of course this episode once again shows up Steed in a bad light: in fact the danger Venus is exposed to makes him look not that different from the villains of the piece, planning a takeover of the great & the good while they are still young, for rather non-specific reasons. I don't personally buy the connection people make to the traditional approaches made to Oxbridge undergraduates (by both sides in the Cold War) to become spies: this feels much more like corruption & blackmail, than an offer of 'work'. This is not being done by a side that you could defect to.
My dislike of continually reappearing actors is usually plain: here there's a relatively heavyweight actor playing East, in the shape of John Standing, who became a Baronet after this show, although he doesn't use the title. His family owned Bletchley Park, where so much intelligence work was done in World War II, until 1937. It takes a real quality actor to play a minor part without you continually thinking it's him: here I feel Standing's quality stands out - he comes across as a different sort of actor from the others, with an economy of technique where some of the others overact at times in this one.
Best bit: Steed making a blooper look like it was intended.
------------------
60s jobbing actors 60s TV Steed's Library The Avengers Venus Smith was an Avengers Girl