The Avengers: Box of Tricks (Venus Smith was an Avengers Girl) 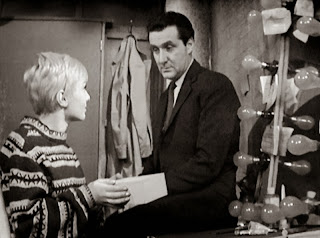 It was only after my last post in this series attempting to rehabilitate Venus Smith as an Avengers girls was up on the blog, I realised that I had totally omitted to make any attempt to rehabilitate her reputation in that post! I have decided to leave it as it is because my omission may point towards why she is usually *not* included in the list of Avengers girls: she is largely ornamental & a pawn for Steed in that episode. She just fits in with other nondescript characters, in complete contrast to, say, Mrs Peel, who you couldn't conceivably miss under any circumstances. My hypothesis therefore is that Venus's disappearance from the roll call of Avengers girls is partly caused by her relatively paltry parts in the scripts. I also think Julie Stevens has a quite dfferent presence from Diana Rigg, Honor Blackman, & even Joanna Lumley - they all have a presence that it is impossible to miss. There's nothing wrong with it, but Stevens's presence in the introductions by her on my boxed set feels more nurturing & comfortable. Even at pushing ninety Honor Blackman can still be extremely challenging - in an interview on youtube with her on Loose Women she still projects in a way that fills the field of attention. I don't know how Stevens's acting education would compare to Blackman's, Rigg's, or Lumley's, but she seems less theatrical, somehow.
As an episode of The Avengers, I don't really have anything to add to the frequent criticisms that the little box of tricks & the disappearing box are a dead giveaway. I'm also not keen on the interchangeable blondes: it actually becomes difficult to tell them apart.
As a development of Venus's character, it's superb, despite her remaining essentially a pawn used by the still-dodgy Steed. I feel she actually becomes a character in this one: even the different hair makes her look like Venus Smith rather than a young woman trying to look like a forty-year-old. The clothes also begin to look like Venus Smith's wardrobe: I particularly like the jumper she has on when she opens the box - the androgynous boyish sixties look suits her so well. In the last act there is a continuation of the rather acerbic character she showed in The Decapod. This episode makes me wonder *why* she's still having anything to do with Steed, I mean, honestly, she nearly got killed in their last encounter! There is a subtle theme of naivety in these episodes, not confined to Venus in this one but it also comes up in the remarkable faith shown in Dr Gallan's little healing boxes. This aspect of Venus's character & the society that surrounds the Avengers makes me reflect on how different society was at this time from now. Larkin wrote that sex began in 1963, & the obvious explanation to me at this distance of time for Venus's continued involvement with Steed would be an affair, crush, passion, what have you. I actually find it far more likely that Venus would be sexually or romantically involved with Steed than I do any of the other female Avengers characters. Given the seedy nightclub setting of these episodes & Steed as lounge lizard, my cynical mind would also tend to interpret him as a man who hangs around nightclubs, involved in shady deals, who would have several 'businesses' on the go, & may at the extreme even be a pimp. People don't tend to like the more child-like aspects of Venus's character: here in true child fashion she is inquisitive enough to open up one of Dr Gallam's boxes. The curiosity & excitement at opening what she thinks is a present are palpable, & endearing beyond anything.
An extremely strong point of this episode is how it looks. The sets are effective, don't really come across as sets, there is always good contrast in the tones on the screen. Visually this episode really is excellent.
The good news is I've finally found someone else, Ron Geddes, who likes Venus & writes:
'Venus's songs are enjoyable; it was a good idea to have a singer in the show for a while. She's very agreeable and helpful to Steed in his assignment even looking to him to give her the nod to take over in the show. Of course she would be inquisitive of the box he gets delivered to her address. I like his reaction on hearing that she's opened it. He's really done all the intelligence work this time however so her enthusiasm at the very end is quite adorable in telling him all they've achieved. She gets everything right but still needs some reassurance. He doesn't even mind getting a kick on the dance floor from another blonde acquaintance because of her. Venus obviously believes they make a great team and for the few episodes she was Steed's Avengers girl�they did.' (http://theavengers.tv/forever/gale1-17vr.htm Thank you, Ron, I was beginning to think I was crying in the wilderness!)
My favourite bits: Steed being a masseur on call to NATO. This cover is so hilarious. Also he's wonderful when he's dramatically telling his symptoms to Dr Gallan. Why he wants to know, I can't think, since all he does is give people a box.
Nonethless this episode is a superb vehicle for Steed, showcasing Patrick Macnee's acting (with an opportunity to over-act) ability to perfection. The reason Venus Smith doesn't stick in people's memories is clear: she's treated as a minor character, despite improvements in characterisation.
------------------
60s TV The Avengers Venus Smith was an Avengers Girl