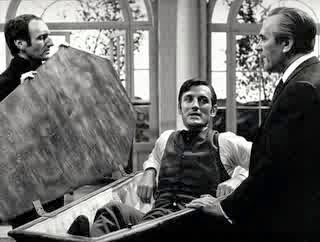 You will notice that this is not a post about The Corridor People. Having seen all four episodes several times now, it is very apparent to me that I'm going to have to reflect on them at length before presuming to post on them here. I'm also going to have to do some background reading : I want to re-read some Joe Orton to see whether the dialogue really is Ortonesque. This may be complicated by the fact that the majority of the stock of the brand spanking new Library of Birmingham remains inaccessible ('Shambles!', thundered the Birmingham Post the other week). Suffice to say I am not ready for a detailed post on each episode yet.
Meanwhile I haven't watched Adam Adamant for a while, so I'm going to cast a baleful eye over this episode. I like the story a lot, but it could be so much better. On the plus side it is perhaps the most Avengers-esque episode, with a plot very similar to The Undertakers. In fact Brian Clemens reworked this episode as Bizarre, the last Linda Thorson episode of The Avengers.
Anyone who's even set foot in my world via this blog will know my dislike of the way the same faces recur over & again in these 1960s TV series, & this episode is largely ruined to my mind by the fact that the faces of the cast are all way too familiar. The top-listed cast, in order as they appear on IMDB, are: John Le Mesurier,Dereck Guyler, Jeremy Young, Arthur Brough, Hamilton Dyce, Ilona Rogers, & John Scott. This is too many well-known faces, not helped by the fact that two of the faces are probably now best known for Dad's Army, so that you spend the whole episode thinking of the characters' other roles. I recently rewatched the Avengers episode that Gerald Harmer appears in, & was astonished to find I had made no connection between his character there & Adam Adamanat, so I don't think I'm being overly harsh. I can live with recurring actors when they're not noticeable, but here it's just overkill.
The plot is superb, it flows perfectly & isn't hammed up too much. Jack May's character is also superb, just acerbic enough, & I love his little rhymes. This episode plays on the way the fad at the time for psychiatry & psychoanalysis would have been completely alien to Adamant. I find it interesting that he just walks in & under hypnosis tells them his real history, which is interpreted as an 'archaic delusion'! I have written before that I find the culture-clash element of Adam Adamant overwritten as a rule, probably because it was intended to be funny, but I find the plot element just right here. Of course there is a crashing great fault in the plot. At one point the baddies say that they have studied Adam Adamant's case to learn about preservation, suspension, whatever else they supposedly do to make a living person seem dead. Yet they manage completely to miss that they are saying this to Adamant himself, who would have presumably been such a celebrity that they couldn't fail to notice this!
There is something strangely postmodern about this episode - the fact that Adamant has already 'died' once, yet is posing as willing to undergo a process based on his own suspension of life. It isn't quite the medium commenting on itself, but it's as if the subject has become so knowing that he can afford to comment on the subject of the episode, while also being the subject of the episode. This high-falutin' subtext is almost completely not mentioned, strangely allowing this episode to be understood on several levels.
In summary, this isn't bad by any stretch of the imagination, but nonetheless I prefer its reworked version as The Avengers episode, Bizarre. The plot is too close to Adamant here, there is that crashing plot disaster in the middle, & I don't like too many familiar faces.
My favourite bits: Adamant producing a medicated snuff that his father picked up at Balaclava. Great virtue there is in not throwing anything away; the place where he wakes up to find the undertaker measuring him for a coffin.
------------------
60s jobbing actors 60s TV Adam Adamant Lives!