The Man from UNCLE: The Gazebo in the Maze Affair 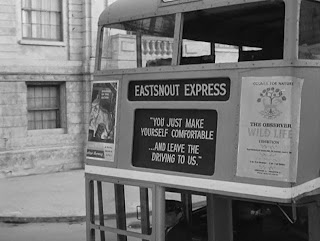 I like this episode lots. It's no use pretending to myself, my first love will always be the later episodes of The Avengers, but this Man from UNCLE can play The Avengers very closely at its own game. It has literally everything you could want, a diabolical mastermind, enough eccentricity to make the later psychedelic sixties look sane, & a contrived atmosphere of phony Britishness.
Visually, what's not to love about a red London bus driving down an American street? Very difficult to fail with that one, really. I particularly love the black policeman's double take when he sees it. And of course atmospherically, an old mansion & a maze can't really fail.
The main failure of this episode is one I notice particularly as a Brit: obviously I have no idea how it would strike an American. There is something subtly wrong about Partridge's Britishness. That is of course only if you take this episode at face value & not the camp feast it really is: Partridge is really as much of a cardboard cut-out unreal character as any in The Avengers. The Nottingham Guards? Really? This apparent failure is therefore only a failure if you miss that this show is a hilarious send-up of both Brits & a certain sort of American. I say this because I feel this show can also be understood on a different level, of satirising the American millionaires who come over here, buy a mansion, & transport it back to the States. Of course it is overdone, the wish to be British is as ridiculous as buying a genuine mansion & transporting it across the Atlantic. This is a similar reference to the uber-Britishness of The Avengers series 6, surely pointed at the American market.
In fact, I would go so far as to say that this *is* an Avengers episode. Strange village. Diabolical masterming. Cunning (but strangely insane) plot. Eccentric commoners. Emblems of British culture. 'Bondage' scene - although with a less sexual dynamic than it would have in The Avengers. The scene in the pub feels like The Town of No Return. Protagonist who solves the situation by remaining the only sane character in the cast... I mean, the similarities are endless. Interestingly the actor who stabs Kuryakin with his umbrella on the bus later played a spoof of John Steed (http://m.imdb.com/title/tt0641096/reviews?ref_=m_tt_urv#showAll)
I can only agree that for sheer deranged acting ability Partidge's wife takes the prize ('I haven't been the same since that awful rain forest business.'), especially laying herself down on the rack. George Sanders, who plays Partridge, was of course British. I had no idea he had been married to Zsa Zsa Gabor, nor that his death was by suicide.
Of course much of Partridge's point is that his wife who is dangerous in her mumsyness ('Come along, get on the rack.') Is the power behind the throne. She actually reminds me of someone I used to work with - 'Let me know when you're ready to comply, dear'. I wouldn't really describe it as having a moral, but this show illustrates very well how dangerous people do dangerous things - by attracting other people with dangerous ideas, or else making those ideas so normative that other people get drawn in. The quality of Jeanette Nolan as an actress comes across in her chilling acquaintance with torture methods.
------------------
60s TV The Man from UNCLE