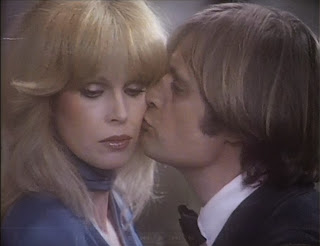 I've commented before about how it's important not to expect television of thirty or forty years ago to work in the same way as television now. I like to think that my personal expectations of television are formed by what I like to consider great shows of the sixties & seventies, & in fact rarely see much modern television. Given this view, I'm in a dilemma about this episode. I wanted to say that if there was an episode of this assignment that could be abandoned it would be this one, returning to my original opinion that eight episodes is too long for this assignment's story. On the other hand I'm trying to visualise what a less prolix Sapphire & Steel would be like, & it just wouldn't work. Plot-wise, all that really happens in this episode is: Sapphire & Steel wake up, realise the darkness is up to its old tricks, & attempt to contact the darkness. Perhaps it comes down to your taste in how the narrative unfolds, although obviously I think this story can be understood on many different levels. So I think this episode may be better understood in terms of recapitulating the various themes & levels of meanings established through the preceding episodes.
The isolation & dualism themes continue: Steel is alone after we hear Pearce saying that it's alright now, & the darkness has apparently won. sapphire is still sitting in the waiting room, but Steel is naturally suspicious of her, after the darkness presented an image of her to him the night before. Fortunately he tests her out & she seems to be the real thing. It is also clear that Time is at play here, since the fall of dust means they have about twelve days missing, & the darkness & the after-images have gone.
Tully speaks to them but is initially invisible, continuing his essential role, since here he is the only way Sapphire & Steel are going to find out what has happened. He can't wait to get out, & Sapphire & Steel even have to orientate him to the time lapse by showing him his mouldy sandwiches. He tells them that 'others' have arrived.
The episode then draws on the salvation theme: Tully has made a deal with the darkness & it has given him his 'freedom'. Sapphire & Steel make it plain that real freedom is not available from the darkness & even use magical/divine methods (I.e. Miracles to prove their divine status, continuing the Christian imagery) to keep him there. In human terms he's really not up to the challenge, continuing the theme that he doesn't like what he has sought out, & just wants a quiet old age. The dualistic theme is continued in that Sapphire & Steel equate to reality, the darkness equates to untruth (Tully even makes the identification of the darkness with the Devil explicit). Steel continues his intercessory role by wanting now to communicate with the darkness itself & make a deal with it. He knows that this is dangerous & nothing here can be relied on. Sapphire reprises her medium role, but there is nothing of Madam Arcati here, it is totally serious & frightening.
What we do know is that they have successfully contacted the darkness, by the assembly of its agents, the after-images, at the end of the episode.
------------------
70s TV Sapphire and Steel