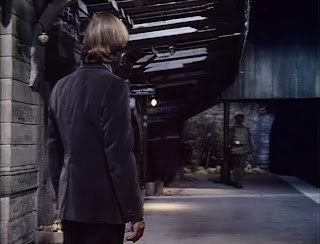 This episode begins with the continuation of the sitting from episode 4, & despite Steel's saying it's gone wrong, it let's us into the soldier's world. And rightly, this is done without special effects, purely Joanna Lumley's acting ability, making it to my mind very effective because simple. I have a feeling that the technique used, trance mediumship, would make this seance very disreputable in the world of psychic investigation today, since it really is so vulnerable to cheating caused by the medium's acting ability.
Nonetheless as far as Sapphire & Steel's investigation goes, it does get them into touch with the soldier. What comes across for me is how young he is: the actor (Tom Kelly) manages to look about twelve years old with tears running down his face. The contrast of his happy country upbringing with his unjustifiable death highlights that what he has experienced is so traumatic, & he was so young when it happened. Once again this shows what an effective drama Sapphire & Steel is, capable of depths of meaning & heart-wrenching emotion that I am sure I missed, watching this as a child.
The Gnostic theme of light & darkness is maintained by the darkness coming 'to help' when Sapphire & Steel get the soldier's name. I find it interesting that they are willing to contact the dead - that doesn't seem to be a problem - yet it is Time that remains the ultimate enemy. It is contradictory, really, because you would think that death would be the ultimate time boundary to be maintained! This is clearly a misjudgement on Sapphire & Steel's part, since Steel says that he has never seen darkness like that & it is capable of bringing back the dead, so their desperate attempt to contact the dead has only further disrupted time. They are clearly beyond their resources here & are therefore experiencing unintended consequences of their actions. The sense of desperation in this assignment allows Sapphire & Steel's compassion for each other to be showcased, since they repeatedly have to save each other from things.
The strange co-option of Sapphire for the disgruntled dead - surely Sapphire & Steel are not humanan & as an element she shouldn't be able to die? - showcases Steel alone again. He resorts to dealing with the situation in his own way by playing to his strengths of assertion & needling the soldier (I sound like I'm doing his appraisal). This part of the episode is genuinely suspenseful, it genuinely feels like Sapphire will not be coming back again, it is genuinely frightening.
A criticism often levelled at this assignment - I have myself - is that it really doesn't need eight episodes to tell the available story, & it is too prolix. However this episode is causing me to review that since I don't feel this episode is simply about a terminally aggrieved dead person being used by 'it' for its own purposes. It's actually about the value of life - hence the unusually prominent role given to Tully, a human - & how that life can be ended by people who don't care or even simply a mistake. It's about human relationships, how we deal with trauma, & how the resulting sense of grievance can really screw you up, in this sense even beyond the grave. I like it enormously that the dead in this assignment maintain their own personality - although their personality is only ever awkward cuss or embittered victim in this assignment - after death & that it is used by the darkness. I also like that Sapphire & Steel are clearly at least somewhat out of their depth: this allows their attempts to investigate & rectify the problem to vary & have a back-to-the-wall quality about them.
All in all it is very clear why this assignment is a favourite with the fans!
------------------
70s TV Sapphire and Steel