Doctor Who: The War Machines 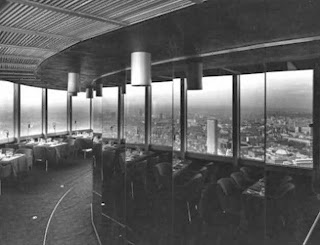 It's not happened so far that I've written the title of a blog post & changed my mind about doing it at all, with nothing written. But for the first time I nearly didn't post. I'm actually writing these words on my first time of watching through The War Machines, having turned off when I tried before. I actually am not sure I really have anything to say about this series, since I essentially agree with the iffy reviews elsewhere on the internet, but I realise I respect this serial enough for trying, that I don't want to leave it unblogged.
The plot & its main preoccupation is the classic sixties one of the fear of the machine taking over. I do love it that WOTAN is credited in the end credits, but sadly that rather sweet touch won't save this one. It was the first of the more scientific ones made after Dr Kit Pedler was taken on as unofficial science advisor. The result is a preoccupation with the computer technology of the time & with the GPO Tower (where my parents ate, by the way). I always find myself thinking about how different the BBC was from the ITV shows I normally watch. The didactic tone, both of The War Machines & the 1965 episode of Blue Peter included as an extra, is unmistakable (I feel it may be a BBC thing that the scenes of Swinging London aren't, as Mrs Peel would put it, very swinging). I do like that this hard science is misxed here with hypnotism & mind control over the phone.
Of course the one thing that is wrong with this series is the, er, War Machines themselves. Our parents or even grandparents may talk about how frightening the Cybermen & the Daleks were, but nobody talks about how frightening the War Machines were. This is because they are not. It is unfortunate, but in the post-fax machine era they remind me of nothing more than fax machines on wheels. Not frightening.
It's not a complete dud: I like Hartnell's doctor a lot. Michael Craze is not memorable for me, unfortunately.
So why am I bothering to blog about this dud at all? Well, sad to say it's worth having for the special feature about the finding of different 'redactions' of the series & its restoration. This is fascinating, a real boy's own fascinating detective story. The moral of course is that I retain a very slim hope that series 1 of The Avengers may be found somewhere. There's no evidence that it was exported, but who knows. It also holds out the hope that other vintage TV shows may be hidden away in a 'developing' country. Then of course starts the painstaking work of restoration, which is also fascinating.
------------------
60s TV BBC vs ITV Doctor Who